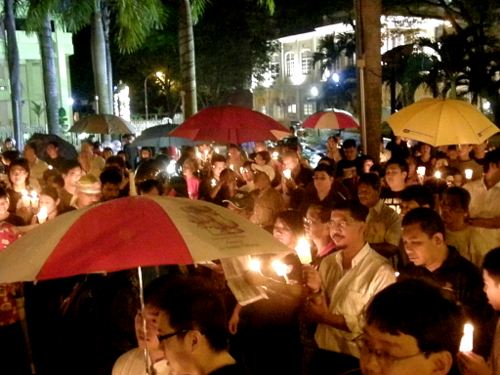 They braved the rain; their spirits were not dampened 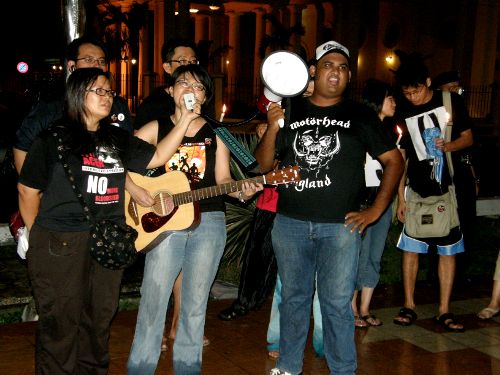 I was wondering how many people would actually turn up for the final candlelight vigil seeking the abolition of the ISA because it started pelting down at around 9.00pm again. Unlike last week, the rain did not clear for a while. But when I arrived, I was heartened to see so many people had already gathered there, some with brollies, others without. This was probably the largest crowd gathered over the last six weeks of vigils – in the rain, some more!

They sang, they listened to speeches, they took an ikrar (pledge) to continue the struggle to abolish the ISA. Among the speakers was Aliran president P Ramakrishnan, who revealed that a police officer had asked him, minutes earlier, to get in touch with an inspector at the station for reasons unknown. “I have nothing to do with the inspector and if he wants to speak to me, he should contact me,” Rama told the crowd.

Earlier on Wednesday, Suaram Penang coordinator Lau Shu Shi was asked to report at the police station in connection with these vigils. Apparently, they wanted more information on what was happening with the campaign.

The police were there again mostly in plain clothes, taking videos and snapping pictures, but most of the participants of the candlelight vigil didn’t seem to mind. They were committed to the struggle to abolish the ISA, and they had made their point about reclaiming the right to the basic freedom of assembly.

A young girl, perhaps around six years of age, walked up to the mike and said, “Free RPK!” much to the delight of the crowd.

The next GMI (Abolish ISA Movement) event is the commemoration of the 21st anniversary of Operation Lalang on Sunday outside Prangin Mall at noon. 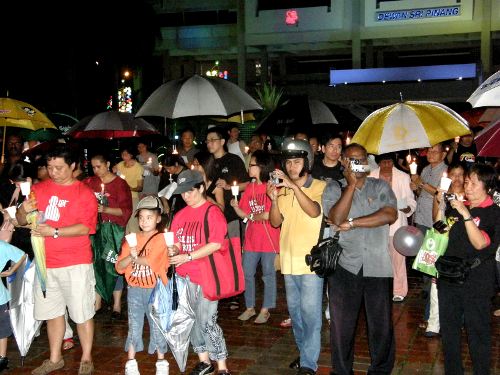 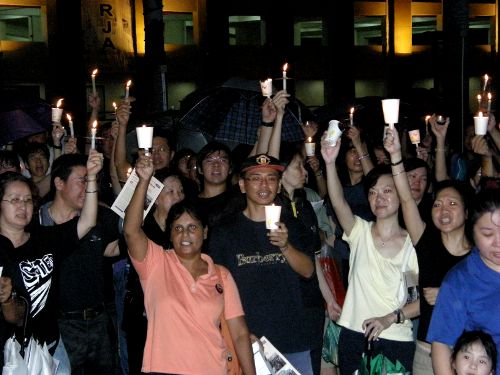 Taking a pledge to continue the struggle to abolish the ISA

Dear Anil The white man who drafted the bill in 1960 has already passed; but his legacy remains. YANG MULIA Tunku Abdul Rahman, our beloeved first Prime Minister said repeatedly, in Parliament and outside that the ISA WAS first meant for the violent Communists and not POLITICIANS NOR NGOS. Now, the current leaders (if you wish to call them as such) want to hang on to power; so the only way is to retain the ISA; they will not easily give up unless bodies like BAR COUNCIL will take strong stand that it is against the HUMAN RIGHTS TO RETAIN… Read more »

We walk with all our brothers locked up unjustly under ISA.

You guys were great, what a crowd despite the rain! Sybas, that was admirable!

Keep up the good work :-)! The ‘walk the talk’ attitude of Penang people never disappoint. Just like Ron Paul’s ‘Campaign for Liberty’ is gaining ground within the grassroots of the US, we can emulate their grass root movement and slowly gain ground with a larger and larger following. After all these years, the lone voices of people like RPK have started to resonate with the Malaysian conscience. We are starting to transcend apathy (tak apa) to a much more visible movement. Hopefully this would foster leaders of the future who understand that freedom and liberty without harming others is… Read more »

Kenntzen, just wait till tomorrow. You’ll see KL(+PJ) will not let Penang down.

Another person is detained under the ISA in Johore AI YOH. I just do not know when will the goverment (run by BN/umno)say we have enough of it.??????? or maybe they are very happy to use ISA on all malaysian to tell them to M.Y.O.B. as this is thier’s in the making………..

er… methink the 1st week (or was it 2nd?) there was also about 400.
after this weekly vigil, perhaps GMI should organise the vigil once a month. if it is stop all together then the momentum of the people’s enthusiasm in calling for the abolishment of ISA might died down.

Dear Anil,
Thanks for the update in Penang. It was a good turnout with strong committed support calling for the abolishement of ISA.

What say you all Selangor People, we should do better and emulate those Penang Lang (Penangnites), six weeks without failed turnout and now 400 people. We share the common hope and we truly miss RPK very much. It is already more than one month, never have I miss someone so dearly like RPK.