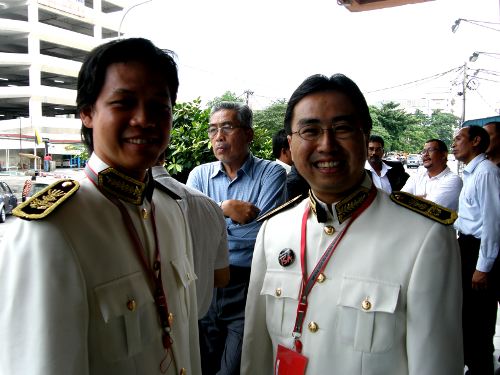 It was a dark day for democracy. If the BN thought that its actions in the Perak State Assembly would legitimise its power grab in Perak, it was sadly mistaken. Instead, it has revealed the naked truth to so many Malaysians about how far it would go to strengthen its grip on power, even if it means undermining the very institutions it should defend.

Aliran’s P Ramakrishnan has issued a statement that, among other things, sharply criticises the refusal of the Dewan’s sergeant-at-arms to carry out Speaker Sivakumar’s orders. He also raises the issue of police conduct in helping Umno to install its Speaker:

Chaos has descended upon Ipoh and the rule of law has been savaged by the brutish behaviour of Perak Umno State Assembly members. What we have witnessed today will condemn us for ever for reducing a much respected institution into the law of the jungle. Decorum was not observed and the rule of law was totally discarded.

By refusing to be bound by the rules of the Assembly, the Umno Assembly members and sergeants-at-arms have demeaned democracy and the democratic process. The same conduct that arrogantly discarded the mandate of the Perakians in the power grab engineered by Datuk Seri Najib Abdul Razak is at play once again in the state assembly ignoring the sanctity of the assembly and displaying the very arrogance that has no place in this sacred institution. Full statement here.

S…! What kind of democracy is this? Is the old man TDM correct when he lamented that Malaysia has become a police state?? There’s nothing else I can describe Malaysia except rule by police and hooligans! Democracy? God bless us! The police can do whatever within law to control the crowd outside and to maintain peace, law and order. Since when can they enter a legislative assembly and take sides??? And in the light of no police reports lodged, even if there are there’s nothing within their jurisdiction and they were obviously acting only on instructions from someone above… One… Read more »

The Prince was extremely kind to Nizar. I was there and I noticed that. Do not listen to false media report.

@stcin Nothing is lost. Nobody said bringing democracy back to Malaysia was going to be a stroll in the park. Let’s take this the right way. 8 March was only the beginning, 7 May a reminder. It is time we hold our YB to what they promised. It is time we citizens take back power. We can no longer merely sit back and whine. Ask your friends to register for vote, tell your relatives about what happened. If they only read and watch MSM, all they’d know is everything is constitutional and legal. The Perak civil service and PRDM were… Read more »

when Nazrin was leaving, that …that…*someone* stopped Nizar from
accompanying…BUT.. BUT the prince invited YB to the lift = RESPECT !

These are contempts of the State Assembly, sabotage and insubordination by all the “GOVERNMENT SERVANTS” involved. What is the punishment for this?

Charge those who violate the very sanctity rule of law in the assembly. The police has crossed their line. The umno thugs has wrecked the every law and order of the assembly.

This ipoh fiasco is so disgraceful to the nation and naturally, the despicable culprit is that shameless umno. Lust, greed and corruption have penetrated so rampantly into rotten umno … After this ipoh fiasco, true democracy for all Malaysians can be achieved only by eliminating that wicked umno but through democratic voting process. Anyway, moronic umno is digging its own grave by this senseless power grab, and no guts to go for snap election to prove its shaky relevance and dying existence. Coming soon as eventually, Malaysians will triumph over this evil umno!

” …. if you want to work with ME in FUTURE, respect my speech, understand !!”

@Anderson Morris, if you still believe anything the NST (UMNO-owned by the way, hence with vested interest here) you may as well believe 2+2=5.

What happened has angered Malaysians nationwide. BN has shown how ruthless and lawless it can get to cling on to power. This has convinced fence sitters that BN should be voted out of power. The people’s hopes for Najib as the new PM is over.

Nizar then told the PR state assemblymen to sit so that Raja Nazrin could deliver his opening address for the first meeting of the second session of the 12th state assembly.

So who is more civil here? Zambry or Nizar?

Cheers to all the Pakatan reps. You were magnificent. Even though it seems like the battle has been lost, you have all emerged as heroes today especially YB Siva.

The rakyat will never forget what happened today.

There will be an answer. Let it be. For now.

There are rules of the House that obviously did not mean a thing to the BN ADUNs or the sargeant-at-arms or Police. If in doubt as to who is the legitimate Speaker or MB, they should have desisted from any action.

By their following instruction of the BN MB, they have shown partiality. But I guess some people in Malaysia have no idea what democracy means, even though they serve the democratic institutions.

This would make a great case study for the future of the Malaysian rakyat but will it be berat sebelah according to the BN ?

simply put : where is justice and when will it be served???? God help us.

When you reported ‘live’ you did not capture/register the following? NST has the story as follows. So, was the royalty having a friendly chat or ticking off Nizar? The Story Raja Nazrin, who had been delayed since the morning by the disarray in the assembly, then asked Nizar and ousted senior exco Datuk Ngeh Koo Ham to approach him. They did their sembah and kissed the regent’s hand. While Raja Nazrin took care to speak to them away from the microphone, his advice, which sounded more like an admonishment, was audible over the hall’s speakers. The Raja Muda told the… Read more »

Savage, that’s a good word to describe the actions today. And what to make of those behind the actions?
I am waiting for the PM to say a fair word of this incident. Is that too much to ask the one who coined 1Malaysia?