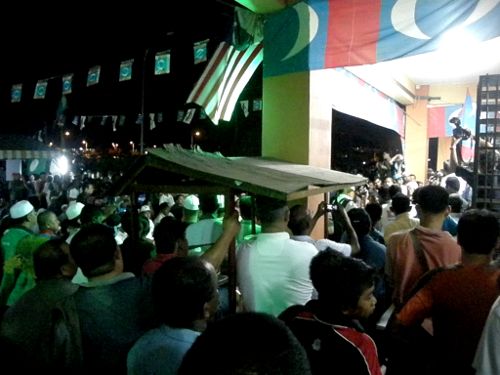 Indoor ceramah, outdoor crowd: Anwar speaks from the covered corridor of a shoplot while the crowd listens from the street outside – Photos by Anil Netto 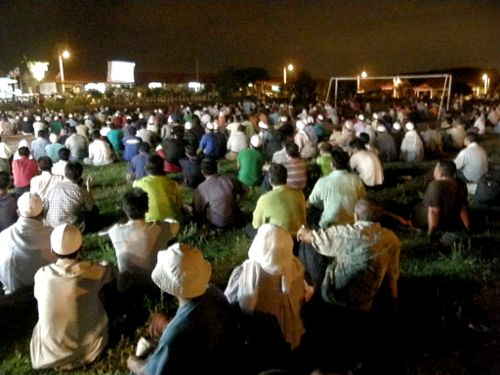 Anwar speaking from inside a private residence to a crowd of 5,000 seated on a field opposite

Take for instance the police restriction on ceramah in “public places” in Kedah, which effectively bans open-air public rallies.

The restrictions confine the ceramah to indoor locations. So the Pakatan politicians are now stretching the definition of “indoors”. While the politicians addressing the crowd are now indoors – in shophouses or inside private premises, the crowds spill out to the streets or fields outside the indoor locations.

Last night in Aman Jaya, Bukit Selambau, for instance, Anwar and other speakers addressed a crowd of about 2,000 from a shoplot. While technically Anwar was in a covered area – at the entrance to a shoplot, which is being used as the PKR operations centre for the polling area – his audience was gathered all around outside the shoplot, some even sitting on the service road and others standing further away across a monsoon drain next to the main road.

Later, Anwar and his entourage, followed by youths with flags on motorbikes, headed to a house about a kilometre away and held another “indoor ceramah”. Inside the premises of the private residence, he stood on a covered stage  and addressed some 5,000 people gathered outside on a field across the road from the house, the field being slightly below road level.

Earlier, at the shoplot, a couple of speakers poked fun at the restrictions on mentioning Altantuya. “What are they afraid of?” they asked. The crowd chuckled.

Police kept a discreet presence and did not attempt to disperse the crowd at these two locations.

As for the suspensions of the permits of Suara Keadilan and Harakah, PKR and Pas reportedly plan to release one-off publications, Suara Keamanan and Hujah, which do not require permits unlike regular publications.

Just imagine you cant do this , you cant do that.
You cant blog in to commence and asked to keep your mouth shut
Do you call it Bias ??

Of cource we are not touching on the issue you are not guilty
until proven.

The mongolian lady’s name is prohibited in all the by-election, goodness gracious as the saying goes ( siapa makan cabai siapa merasa pedas) The sultan’s name as well.

what the hell is going on in malaysia…?

why everything done by BN/UMNO is so stupid & disguting, while what done by PR is so smart & creative??? am i being bias here???

Who says Malaysians are lacking in creativity?

Item: People in the Ruling Regime regularly find creative ways to
make us the laughing stock of the world.

Item: People on the Other Side find creative ways to
circumvent the silly rules and thus, further amuse the rest of the world.

UMNO/BN are so narrow of ideas. No wonder they still need Mahathir in UMNO to be their adviser. Old …, old and stupid ideology.

wandererAUS, I think you have no brain too. The talk should always be about how PR can help the community, how to develop the country, how to bring up the future generation with a better mindset. A person is not guilty until proven guilty, isn’t this what everyone believes in? or you believe that a person is always guilty until proven not guilty just like how the PDRM deal with the people? Najib is still a suspect at the moment even though the evidences are not favoring him. you said “crowd outside should in uniform chanting, “Hidup Altantayu!” Let’s see… Read more »

BN is going to ridiculous length to prevent the opposition from making their presence felt but in the process they make themselves a laughing stock. Who wants to vote for clowns may I ask?

I think the periodicals ‘Harakah’ and ‘Suara Keadilan’ were suspended possibly due to the fact that our hero, the home minister wants to show our DPM that he would like to stay in the cabinet longer under Najib’s premiership althoug loosing his UMNO elections! what say u?

Like I have said, we can always outwit these UMNO…. Matter of fact, the crowd outside should in uniform chanting, “Hidup Altantayu!”
Let see if the police will round up all the 5000+ crowd.
With botak’s brain, a kid will outsmart him!

let it spilover on the road and fields