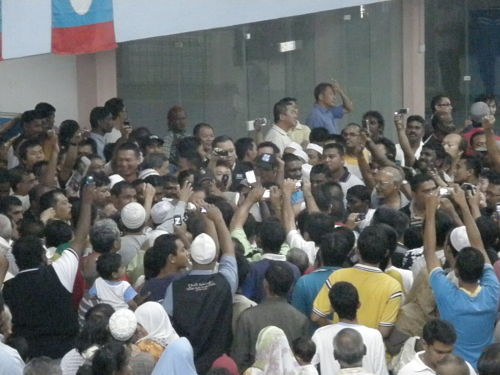 Anwar enters the hall in Kulim to a hero’s welcome

Anwar Ibrahim was given a hero’s reception in Kulim, Kedah during an emotional night when he announced that he would contest a by-election here barring obstacles. In doing so, he has raised the stakes considerably. 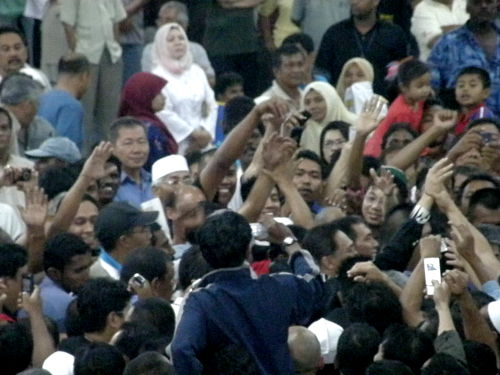 A barely visible Anwar dressed in black long-sleeves with hand outstretched (towards the right, below) wades through the crowd

He was mobbed as he entered the hall, led by lion dancers prancing ahead. Hundreds lined his path with outstretched hands either holding cameras up high or trying to reach out to Anwar. Even from a vantage point above the crowd, I was barely able to see him as PKR escorts struggled to guide him to the stage.

About three-quarters of the crowd were Malay with a sizeable number of ethnic Chinese and a visible Indian presence, reflecting Kulim’s ethnic composition. 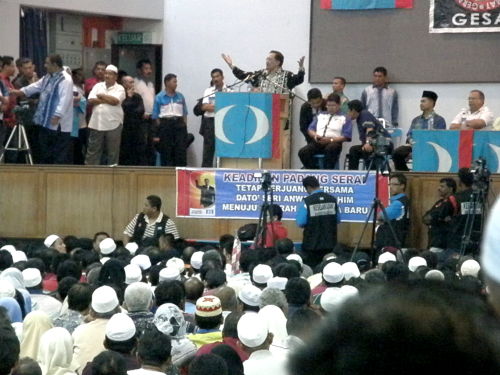 And then, he declared: “Barring obstacles, I can announce that I will contest in Kulim, inshallah.” The crowd erupted.

Anwar shrugged off recent news of Pas-Umno talks. He told the crowd that he and Hadi had been in close communication and he had spoken to the Pas president over the telephone earlier on Sunday. “Hadi assured me that Azizan would fully mobilise the Kedah Pas machinery behind me in the event of a Kulim by-election.”

He said that the DAP had also indicated its readiness to assist if a by-election is held in Kulim, which lies in Kedah, just across the border from Penang. The town is just 15 minutes’ drive from Anwar’s home base of Permatang Pauh on mainland Penang.

Anwar indicated that the incumbent Zulkifli was ready to give way to him.

A couple of PKR town councillors from Kedah later told me that “it was 80 per cent certain” that Anwar would contest in Kulim – though a lot would also depend on the outcome of the court case involving Zulkifli.

He said that the surgeon in Munich, Thomas Hoogland, who performed surgery on his back refused to accept payment. “Imagine, he, a Christian doctor, was willing to forego payment because he recognised my struggle for justice on behalf of the Malaysian people and knew what I had been through,” said Anwar, as the majority-Muslim crowd broke out in appreciative applause. 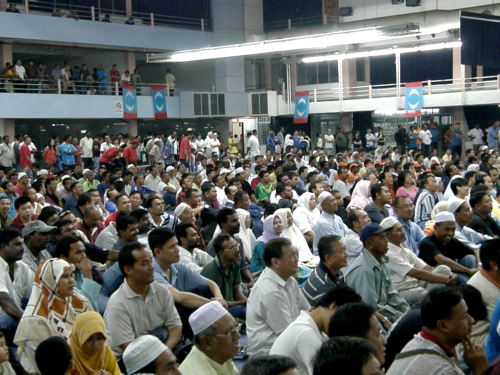 Anwar also described in some detail the recent medical examination he underwent at the KL Hospital after he was asked to take off his clothes. “They examined me front and back. They even took out a ruler to measure me!”

“I was even asked to fill out a form meant for rape victims,” he lamented.

“If they think they can shame me and deter me from the struggle this way, let me say, I–WILL–NEVER– SURRENDER,” he thundered.

He also recalled his oil price debate with Shabery Cheek. “He started talking about Iran and Venezuela and began foaming at the mouth,” said Anwar, as the crowd hooted, knowingly.

He recounted how a kakak later asked him why he had to “win” the debate: “Couldn’t you have just conceded defeat?”

Puzzled, he asked her why she said that.

“Then they wouldn’t have treated you that way,” she said, referring to his dramatic arrest and ordeal the following day, as the crowd laughed.

He said that if he had agreed to all the damaging policies the BN leaders had proposed for the country, he would have been “Tun Anwar” by now. 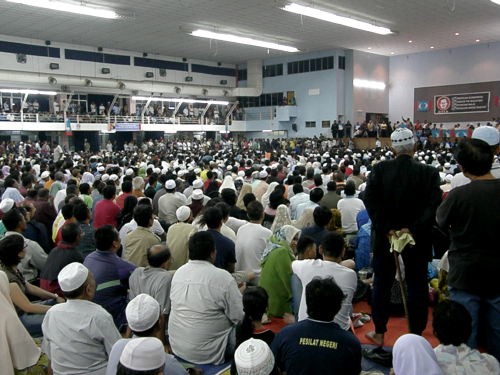 Claiming that RM10 billion was being lost annually through corruption, Anwar reiterated that he could immediately reduce the oil price by 50 sen if Pakatan Rakyat took over the reins.

His proposal looks even more feasible now – at least as a temporary measure. The global price has plunged from around US$146 per barrel a couple of weeks ago to US$123 now as speculation appears to be losing momentum following fears of a global economic slowdown.

Revealing his ideological mindset, Anwar referred to an ekonomi pasaran (market economy) that would transform the Malaysian economy into one of the giants of this region.

But he added that the existing order was worried about the Pakatan’s plan to uplift the downtrodden, put an end to corruption and bring the various races together after 50 years of divide-and-rule.

Let Ezam challenge Anwar in a by-election. He will lose his deposit!

Go Anwar, Go! Don’t let the …charges of sodomy (which I believe is false) distract you.

DSAI’s sorrowful days are coming to an end… For all your sufferings, God has a way… Surfacing of Saifool’s Medical Report…will; I think make a lot of difference in the coming days.. OK-lah, I think the Selangor State Govt. can now confidentally allocate that large plot of land (maybe 30 acres or more) for the expansion of Sungai Buloh Prison… All the contractors will construct the buildings for free and we the Rakyat will also pay for it.. You know for what, lah?? It’s going to be filled with – thousands of Dato’s, Datuk Seri’s, Tan Sri’s and a handfull… Read more »

Don’t angry. I think this is strategic announcement. Because the court still don’t declare zul lost. May be when they hear Anwar want to contest there the decision will change and Zul still hold his position. If Zul lost then this the best place for Anwar to contest. Win, win situation I think.

Good idea, din. Like some people who bought strategic swamp land in the 70’s.

Bravo, the finish line is in sight. Another ‘dragon’ is entering the parliament. In no time, let’s see how the BN GOONS and the puppet speaker will react.
Let’s all pray and make this a reality. Fellow Kulim voters, the RAKYAT place their trust in you people.
Time to rid the dirty BN government and place the RAKYAT’s government in. Hip Hip Hoorey! X3

The dream is going to be realized very soon. Justice always prevail. The Atlantuya’s killer, pls watch your back, she is haunting you now! The sleepy beauty, keep on dreaming with your queen, soon you will find yourself living in IWK tank. And the undisputed Kurang aJar, it’s time for you to go and ask for forgiveness from god for all the damages you have done to Malaysian. Last but not least the famous great Dr of Malaysia, don’t forget the past as God is going to pull out your balance sheet and check how much merit you have done… Read more »

Syabas DSAI ….. now that there is evident Medical Report and being the first report and not the 2nd report from another government related party …. I think PR (minus the … backstabbing PAS) can win this election and the next general election and form the next government …. very looknig forward to it.

We hope that PAS leadership is sincere in this latest pursuit of DSAI to be an important member of parliment again.Kedah govt. is a PAKATAN govt. but led by PAS.They have promised full support for Anwar but..an element of doubt or double-crossing is there? If Anwar looses,people will loose their trust in PAS as a political party because they are the hosting state.That will mean PAS has lied to their partners again.They would have lied to the rakyat. What can PAS leadership do this time for us to regain our trust in them? How come Ezam could bravely challenge Anwar… Read more »

AhSeng, You have lost the plot. It was decided very early by the entire PKR leadership that Kulim was the best. It was not decided yesterday and Anwar was not the one who simply settled on that seat. Secondly, Zulkipli can’t stand again in the same seat if he is disqualified by the court, that’s why Anwar said he will contest “barring obstacles…” (I.e if Zulkipli retains the seat-the court dismisses Aziz’s case or if his sodomy conpiracy is prolonged by the nefarious AMENO gang). Otherwise, he is not robbing anyone and rest assured that Zulkipli who is an Anwar… Read more »

Nice report.
Indeed, why not Anwar?

YES! Anwar will get FULL SUPPORT. That little boy Ezam also says he wants to challenge Anwar. He will break Anwar’s secret which he claims he kept. Its OK ezam. You can say it. UMNO’s/BN damage is done. Whether Anwar is corrupt, cheats, bla, bla, bla… BN is worst! You tell us who is not corrupt when being at the top… Go ahead, be a hero. But if you loose, haha.. YOU ARE GONE brother! You can say goodbye to politics …

In a way it’s rude for Anwar to make that announcement before the court even done with Zulkifli’s case.
His act of announcing the news to the whole congregation was purely political motivated with zero sympathy to his fellow politician.

Anwar will win big against Aziz Sheik Fadzil in Bandar Baru Kulim as he is (seen) to be (allegedly) a racist… DSAI is assured of 19% Chinese Votes!

I can smell the PutraJaya !

I am not Anwar supporter but lets its be.
Give a try for Anwar no harm done.

rajraman.100plus days interested in Politics of nonstarter Politician due to UMNO/Barisan and the people.

Andrew, reason is probably you are hoarding them! ha ha !

Kulim used to be UMNO/BN stronghold up to 2004. Not anymore now when they put that ***** Aziz Sheikh Fadzir to contest as candidate in 2008. For his threats to burn down Suqiu h/q in 2001, Chinese shopkeepers all over town refused to see him and shut their doors in his face. When Aziz contested in DUN Kuala Ketil, he nearly lost because the Chinese and also Indians boycotted him. Malu tersangat! Anwar will just win hands down in Kulim Bandar Bahru. But Anwar must beware of all the money (taxpayer’s money anyway) which UMNO will flood the constituency. (They… Read more »

What we want and need now is positive actions from Anwar. This sandiwara has been going on for too long. Let the battle begin.

Yes we are sick to the guts of the current govt. Thanks to a useless and incompetent PM and a DPM so tainted my table cloth smells a lot better.

Umno m******s said, “If you don’t try, you will never know” Bad luck this time, you will be “sodomized” by the voters in Kulim. Anwar, better request the ACA be around, money politics which the BN is most famous for will undoubtedly, be in full action!

There will be a shortage of adult diapers and one way tickets abroad quite soon.

1. Anwar commit Sodomy? He can’t because you have to ask the wife.

2. Najib really did not know Altantuya cos he is also not a sodomizer. He likes it straight….

3. It’s the truth, the whole truth, and nothing but the truth so said by every accused in any court of any land. Do you not believe in men when they swear in the name of God, Allah, Yahweh etc?

Anwar can “I’LL NEVER Surrender” how about Zulkifli Nordin?

All loving Malaysians are outraged how the UMNOputras has successfully
diminished the powers of the legislative and judiciary branches of the Government! It is totally unacceptable and must not continue! DSAI must win the by-election to stop this travesty from Umnoputras and BN Government!TOTAL SUPPORT FOR ANWAR-THE BEACON OF HOPE FOR ALL MALAYSIANS!