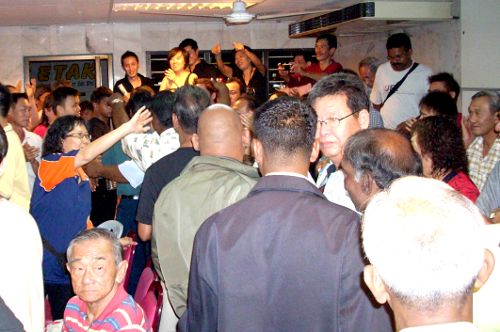 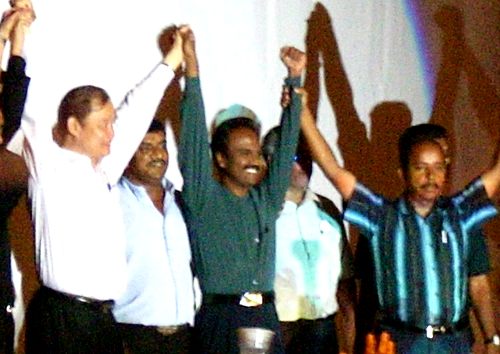 The Perak Speaker acknowledges the crowd

Keeping alive the flame of democracy, justice and freedom (Click to expand photo)

Kinta Kid reports from the first anniversary commemoration of the Pakatan in Perak last night:

The commemoration took place at the Tow Boo Keong Hall, a venue that actually has two halls separated by a temple in the centre. One of the halls was fitted with projectors for live viewing of the action from the main hall. The crowd was estimated at over 5,000 with the majority of them Chinese.

All the top guns were there such as ‘MB yang sah’ Nizar and Lim Kit Siang. But the hero of the night undoubtedly was the honourable Speaker V Sivakumar, the man who gave the country its Pokok Demokrasi after an emergency sitting of the Perak State Assembly was held beneath a raintree on 3 March 2008. Clearly appreciative of this person, the crowd in the hall rose and burst into applause as he arrived.

Throughout the night, the speeches carried the same theme: calls for a fresh election, Najib being the one behind the defections and why he should not be the next PM. The sentiment felt throughout the night was that the rakyat – at least those who were present – still want Pakatan in office. You could see it on their faces when they responded to the speeches whether made by the DAP, Keadilan or Pas speakers.

Lim Guan Eng was to arrive at around 11.00pm but I had left by then.

All Pakatan ADUN for PERAk , Firstly I salute for the courage and committment. As a Hindu Vedic Astrologer I have predicted that whatever you have done to the rakyat will be bless in double soon. Perak will become a respectable state under the governance of pakatan. That will happen after Jupiter transit to Aquarius in Dec 2009.
Bravo MB Nizar and YB Siva. Keep up the true spirit.

we r getting tired with political problem.all the MP r busy with the same issue n neglecting the development of perak and serving the people.NO point looking at the same issue and it will never end.just wait for next eletion.unity among pakatan very important…

Hi every body!! Many things happen lately that challenges the credibility of each individuals. Say and do anything u want, but all that matters is how you are remembered!! To the BN camp, u have acted most ruthles, corrupt, total disregard to democrasi, total disrespect to the people and all that can equall to evil, …., idiot , stupid, bodoh, and so on… To PKR camp, bravery, courtesy, abiding law, determination, righteous, unity, charity, transparency and the list goes on.. YB siva kumar, YB nizar and other, be assured that even ur grandchildren will be so proud that they are… Read more »

Anil, Thank you for the update. YB Sivakumar, YB Dato’ Seri Ahmad Nizar & All the Defenders of Truth, Justice, Equality, Human Rights & Freedom for All Anak Bangsa Malaysia…. You have all done everything that is “Humanly” possible, but “Do Not” give up the fight & struggle…. God Almighty “Hears & Feels” the Call, the Pain & the Despair of the downtrodden rayaat. Remember “What goes round, will come round to these Desperate UMNO…” – Past, Present & Future. The “Opressors” will “FAIL” & God Almighty will ensure “Justice” will be done. Do keep up your “Prayers” to God… Read more »

Congratulations on Pakatan’s First Anniversary .. We in London are elated and impressed at the good work being done in Perak !! As a follow up we in London are organising a …. Pakatan Get Together Sunday 15 March 2009 Holiday Villa Hotel 37 Leinster Garden , London W2 3AN ( Nearest Tube – Bayswater or Queensway ) Dear Supporters & Sympathisers As many of you are aware , Malaysia is going through rapid changes in it’s political landscape since the March 08 Elections .. We , the Overseas Malaysians have been watching these events with great interest and enlightened… Read more »

Whats happening in Perak & Malaysia is a wake up call to all Malaysians.For the sake of our Children and future generations, how we UNITE as Malaysians to shape what type of society we leave them will determine the type of Government & Society they will inherit. For too long people have kept quiet -just imagine if ALTANTUYA case did not come to light…..the Crooks stealng the Country’s wealth under or nose and getting away with murder as well ! It stinks to high heaven to think Razak Baginda is now in London living in a multi million home …… Read more »

Guys, Don’t comment based on hatred, but on fairness. We must base our ideals on truths. It’s nothing to do with her going about in a Merc, in fact, you see Mercs quite a lot anyways. There could be many reasons, she could have well worked really hard to own one, or could be owned by someone else in her family, etc. Lets not jump to conclusions 😉 Nevertheless, I do not agree with politicians jumping parties while keeping their post as representatives of the people. There should be practices against such thing, rules of the game to regulate such… Read more »

Very stylishly done Mr Speaker of Perak, and so inspiringly too, so with respect, I think it’s time for a well-deserved BRAVO! And my hat’s off to you in recognition of your learned and professional, and IMO correct, application of the wide constitutional powers vested in that classy hat which only a legitimate Speaker of a lawfully elected Legislative Assembly of the People has the privilege of donning and the right of flexing. And the Democracy Trees are a GREAT idea and sure to be PR vote-winners, so could we please have more of such types of uplifting and smart… Read more »

Sir, you are just great!We,most Malaysians are in support of you. We are indeed extremely proud of you YB Siva. GOD bless you, MB Nizar and all in PR..

ya, a laughing stock of the world. its not perak though. but BN!

how stupid for a clerk to decide the august house closed?

and look at the behaviour of the cops and the decision of the judge. aint no laughing stock?

To N and gangs, Kuli and Zaid have said the words, the people will get back what has been taken by you and your gangs…

Yes, a standing ovation for making Perak the laughing stock of the world. Keep it up.

“OUTRAGEOUS” IS WHAT HAPPENING IN OUR POLITICS TODAY.

YOUR CAN PROTEST , YOU CAN CHALLENGE , YOU CAN RALLY , YOU CAN PROMISE,YOU CAN PROOF BUT SAD TO SAY IT HAD ALREADY BEING SEALED AND SIGNED AND A NEW “REGIME ” WILL SURFACE ON APRIL FOOL DAY.

SORRY SEEMS TO BE THE HARDEST WORD.

Him (V Siva) being Indian or not, is NOT the issue. Him being brave not to plunge into greed like many of our politicians…THAT’s the issue. I pray he stays true to his principles and stick to it till the end

Hip hip hip Hurray..! Well done YBs. You have proved your wisdom towards the people. Most of the perakians are with all of you, beside The Great Democratic Tree and its five babies.

YB Sivakumar , keep up the marvelous work. We need more people like you to guide the people in democratic way.

YB Siva, you are a true politician. They people will walk with you for what you had to put up with. UMNO/BN ought to be ashamed of themselves that they have none who has your wisdom.

If the deaf can hear the cry for ” Fresh Election ” and yet you
are dead silence..dont it hurt to see someone honourable like you
torn between “two lovers”

Are you happy with the ways things happening in the Silver State ?
We can see in your eyes ,sorrow shows.

TOUCH YOUR SOUL , IS NOT TOO LATE.

We want to see your smiling face again !

i use to drop by @ jelapang for food when i travel kl pg, but now i feel like throwing out b`cos of one stinking ****** & the ******
still got the cheek to come to jelapang by the merc!
TO SIVA U SHOW UP @ THE RIGHT TIME BY OFFERING UR SELF AS SPEAKER. PR STATE ASEMBLY MADE A PERFECT CHOICE,KUDOS!!MOST OF ALL
PERAKIANS MADE A PERFECT CHOICE.

Thanks for faithfully keeping us updated.
Way to go, Speaker Sivakumar, MB Nizar and Pakatan comrades!
I salute them all for standing up for what is right in the face of great difficulties, and thank them for their sacrifices.
I constantly pray for God’s wisdom and protection for Pakatan, and for the restoration of democracy in Perak.

The woorld knows, the ruling BN does not know that no action can be taken against the assembly. Most probably the lawyers in BN have forgotten the law. Why has the speaker of Parliment kept quiet. DOES HE AGREE WITH WHAT IS HAPPENNING IN PERAK.

What a crowd! The majority are Chinese and this is a very good sign as the Chinese have usually shunned political engagement but now they are becoming politically active.

As for Hee, isn’t it a little too early to show off her wealth? I hope all petrol stations in Jelapang area boycott her Mercedes so that she’s forced to drive out of town to pump petrol.

Let the truth prevail and let the perakians decide once and for
all who rules Perak.YRH please uphold democracy in Perak.
The people should rise up against injustice in every facet of our
government. Please MACC do not be be selective in your action.
Show that u r truly independent .