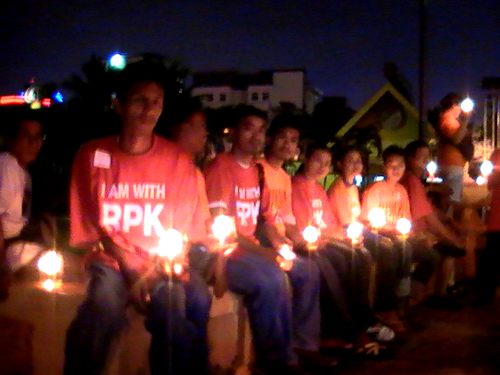 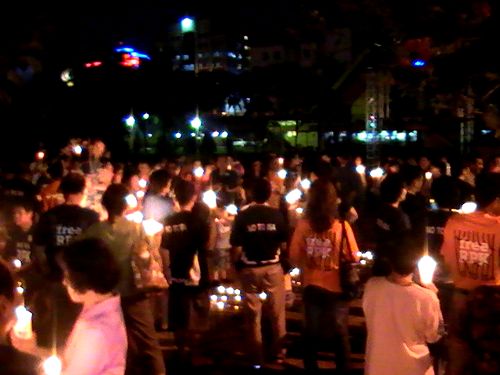 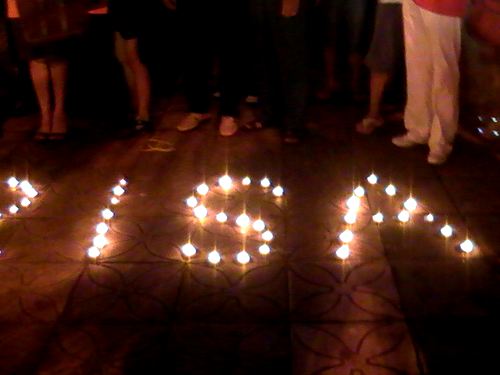 kkitsam tells us about the messages from Marina and others:

I will say yesterday was a special night, even though the date was bought foward last Friday, and rain from 3.00pm to 6.00pm around KL (after being cloudy all day) failed to prevent a strong crowd of 300 people from turning up.

Marina got the crowd going by lighting the “NO 2 ISA” candles and delivering a message. She thanked the crowd for their continuing support and spoke of RPK’s medical check up a day earlier. The doctor revealed RPK has a good heart, but his back was bad.

Then Gobind got the crowd roaring to fight against the ISA. Both Zorro and Haris also said a few words. It was declared that there would be a Vigil every Sunday at 8.00pm at the same place until every ISA detainee is released.

2130: I gotta go ‘cos I have just met a couple who have volunteered to give us a lift back. We leave at 9.30pm. The crowd is still there. As we drive past, our driver honks, like someone else did earlier. Sounds of support and freedom for RPK and the rakyat. Yes! Great night, very satisfying. Please continue to keep RPK and family in prayer.

2100: LKS arrives. Now the crowd has swelled to more than 250 or even 300. Sea change? Fireworks tomorrow? Too noisy now, can’t hear what’s going on in front. Be patient, I suppose. Shortly after this, Marina’s walks around: more hugs, more thanks, then goodbye.

2045: Marina’s here; so is Gobind. Marina leads the way: she lights the candles, making out the words “NO 2 ISA” on the ground. Gobind helps out as well.

Next, Marina updates us with what’s going on and asks all of us to visit the Malaysia Today website ‘cos she has launched ‘My little scrapbook’. Please visit the website – it’s self-explanatory. She thanks everyone for coming from near and far for their support and urges us to continue to seek the truth for justice.

Next Gobind gives us some updates followed by addresses by two well known bloggers.

“I don’t know” came the reply.

So, I catch hold of some senior blogger and ask.

Interestingly, everybody’s busy lighting candles and doing stuff on the floor. Be careful now, someone is forming some wording on the floor with candles: “NO 2 ISA”. Great.

Don’t light it first, wait for the man… sorry, woman… of the hour to do the honours. Who’s that?

Man, can’t tell. Sea of people, probably more than 100. It’s like a carnival but minus the music. It’s peaceful; yet lots of movement of people… chatting, ocassionaly some laughter from a group over here and a group over there.

1930: Arrive at main hall of Padang with my partner. Fewer than 15 of us!? Where are the rest? We are probably too early. Supposed to start at 8.00pm. Feedback is not that encouraging. No jams on the road, everything is quiet though I see a police van passing by. Have faith, wait… wait… wait…

hmmm. inspirational. i want to make something similiar but with 20,000 candles. any advise?

God bless all of you & Raja Petra who is fighting Corruption,Lies,Cheats & Crooks & even Murderers… Our hearts & prayers are with all peace loving & anti ISA movement as we are overseas. Syabas ! & REFORMASI

My contribution to the campaign to abolish the ISA and demolish Kamunting is posted here.

After reading this account and viewing the accompanying video, if you STILL insist we need the ISA and the Secret Police, then we shall have to write you off as a human being!

“It was declared that there would be a Vigil Night every Sunday at 8.00pm at the same place until every ISA detainee is released.”

Hi Anil and Penang folks, i went to yesterday vigil night as well. I will say yesterday was a special night, even though the date was bought foward last Friday, and rains from 3 to 6 around KL (cloudy all day)a strong crowd of 300 people turn out. Marina gets the crowd going by lighting the NO 2 ISA candles, then deliver a message: to thank the crowd for their continuing supports as well as speaking of RPK’s medical check up a day earlier, of which the doctor reveal RPK have a GOOD HEART, but his back was bad. Then… Read more »

We Dream with RPK — LET FREEDOM RING Upcoming: Anti-ISA Candle-light Vigil in PJ on Sunday, 19th October, 8pm http://iwfrpk.blogspot.com/2008/10/we-dream-with-rpk.html Venue: Padang in front of Amcorp Mall, next to A&W Restaurant, Petaling Jaya (Map) Time: 8pm Date: Sunday, 19th October, 2008 Please bring along your own candles & wear your RPK t-shirts; most importantly bring a friend. Let’s show our support to RPK & family, and all of the ISA detainees. T-shirts will be available for sale on-site subject to stock availability. Supporters of RPK & Malaysia-Today === I HAVE A DREAM (excerpts) Martin Luther King Jr., at the March… Read more »