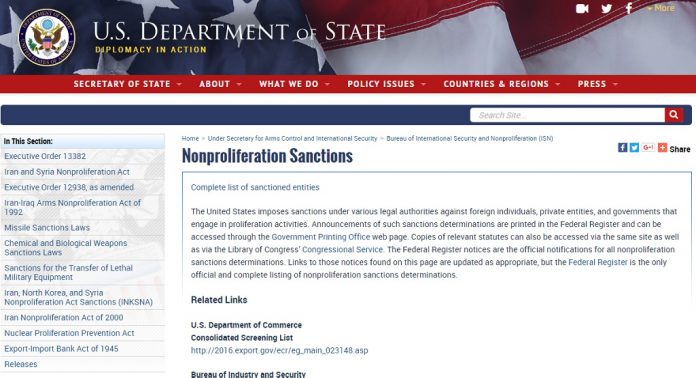 A few Malaysian individuals and entities have appeared on the US State Department’s list of sanctioned entities and individuals believed to “engage in proliferation activities“.

You can check out the list here. Some of them date several years ago, and the sanctions have expired or have been lifted; a few remain active.

According to the State Department, “announcements of such sanctions determinations are printed in the Federal Register and can be accessed through the Government Printing Office web page.”

Here is one such entry in the US Federal Gazette in July 2016 that mentions a few Malaysian entities and it states:

A determination has been made that a number of foreign persons have engaged in activities that warrant the imposition of measures pursuant to Section 3 of the Iran, North Korea, and Syria Nonproliferation Act.

Have a look and see what you make of it.

The Employees Provident Fund (EPF) recorded a realised loss of RM203.18 million when it sold off its shares in Felda Global Ventures (FGV) last August.

Is this the reason for the low dividend pay out to the EPF holders?

By the way, I guess many have yet to realise that most local banks no longer pay you interest for your money in your savings account if its monthly average is less than RM1000. Wonder why CAP never investigate. Like this poor people will never get their meagre savings to earn interest.

Where did you read that?

Anil, your Readers’ alerts is still not working!
Is it on sanction list?

No.. trying to sort it out.

I hope MO1 in the list but looks like MO1 really can sweet talk anyone with his saliva.

Trump said MO1 his favourite PM.
rajraman.Small shark can been seen but killer Whales killing Malaysian economically can’t be seen.This is Uncle Sam eyes how they view the world.
Your system back again anil.Updated again via email for this topic.

Bolehland a strategic location court after by USA n China, may be Russia later. So Najib plays the card well to get favours from all to secure position with more blackouts assisted by superpowers next GE?

Raj666, even Superstar Rajni invited Najib to his Chennai home, and Najib may learn from him to flip coin the Sivaji way to woo Msian Indians coming GE14.

Damien Since Najib knows the weakness of Indians (most indians) community by playing his game to get votes,you should advised DAP and PKR help out the Indians.Help the poor Indians a good job on merits and provide some businesses for Indians community from their GLC. Ask elected Indian MP from DAP and PKR to ask openly for minority rights of Indians.If cannot,ask Azmin Ali and LGE to visit all the stars from India before too late. rajraman.The Malays given with golden plates openly by all Politician,the Chinese get it by fighting for their rights by their MPs and also from… Read more »

Sorry, this is going off-topic.

Very well aware Anil.Damien posting and question off topic and as usual i take the chances.
rajraman.Thank you Anil.I going to try in this same posting 5 votes.Positive for one individuals and lets see how your votes can be rigg.

Many had hoped that Sivaji the Boss could give Jibby ‘The Office’ treatment as in the movie. But Rajni is just an actor hoping to get good movie deal for Kabali sequel (tax free?) in Bolehland.

Kabali sequel will pit the gangsters against J Revolusi or Gerak Khas of Malaysia, with blessing from PDRM and Finas, fully funded by Red Granite of Jibby’s son in law production company?

Trump has also identified Malaysia as one of the top 3 Asian nations (besides China and Indonesia) which US has trade deficits. Looks like Gerakan Mah will have harder time exporting our oil Palm products to USA.