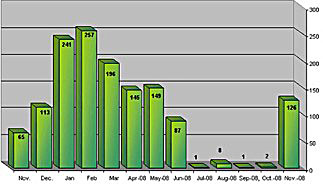 Much has been said about the home-made Qassam rockets fired into Israel in the same way that the United States cited WMD before its illegal invasion and occupation of Iraq.

This is a chart that was drawn up by the Intelligence and Terrorism Information Center at the Israel Intelligence Heritage & Commemoration Center. It was removed from the website of the Israeli Ministry of Foreign Affairs on the eve of the ground invasion and replaced with an almost illegible graph in which the labels obscure the data, according to Jim Holstun and Joanna Tinker in the Electronic Intifada.

The chart shows a distinct lull between July and October 2008 – despite the crippling siege of Gaza. Evidently, this lull was not enough for Israel,

which violated the truce by imposing a terror-famine in Gaza for most of these months. But despite these violations, Hamas refrained from launching rockets until Israel definitively cancelled the truce on the night of 4-5 November by sending an Israeli commando squad into Gaza, where it killed six Hamas members. Hamas responded with 30 rockets.

Without Prejudice … Anil, Hamas are terrorists. Read their charter. How can you justify Hamas Qassam rocket fire? After Mumbai, 9/11, the Islamabad Marriot bombing, Bali and countless other terrorist acts, the world must not tolerate terrorism in the name of any religion. Hamas uses human shields all the time. Not all Palestinians support Hamas, and even the Saudis are keeping their lips sealed. We shouldn’t support the killing of civilians by the IDF, Hamas or anyone, but we must never, ever support Hamas terrorism or justify the firing of rockets into anyone’s home. How would you feel if it… Read more »

Actually it’s wiser for the Israelis to learn diplomatic skills instead of forever relying on big guns and the US for protection. There are only 20 million Jews in the world compared to 1 billion Muslims. The US is also going downhill fast. If I were them, I would be making friends as fast as I can. They lost 6 million kinsmen in Europe so they are not invincible.

Depravity and double standards “Hamas gunmen are commandeering ambulances and taking children out with them to battle, according to Israeli security sources. At every moment, with every use of firepower, there is the potential for Palestinian civilian casualties. As they mourn the loss of five soldiers, IDF commanders are well aware of the mounting Palestinian civilian casualty toll. They are bitterly cognizant of the reality in which Israel is blamed internationally for every such death – ratcheting up the international protests and the international pressure for a cease-fire. This impacts Israel’s leverage as it seeks acceptable terms for a halt… Read more »

To the Palestinians: we’d love to live in peace alongside you, but if not, you’ll never ever beat us.

To the antisemites of the world: our distant descendants will still be here, tut-tutting over your malice, centuries after your own descendants won’t even remember who you were.

Who the hell wanted to mess with the mosts sophisticated army. – ukka, and it`s for this underwater drachen also You want to know who? It`s written in the book of the followers of the True Faith (which you are shy to acknowledge or revert to): Article 7 of the Hamas Covenant states the following: “The Day of Judgement will not come about until Muslems fight the Jews (killing the Jews), when the Jew will hide behind stones and trees. The stones and trees will say O Muslems, O Abdulla, there is a Jew behind me, come and kill him.… Read more »

Yes, Anil, you’re a Christian and all Christians must support Israel, even though a lot of Jews lost their faith after the Holocaust and are now atheists. God hates the Philistines and the Palestinians because they are sitting on the Promised Land that He wants to give the Chosen People, the Jews. Please confess your sins, repent and beg for forgiveness immediately!

Gaza Terrorists Forcing Residents at Gunpoint to Face IDF “Hamas has no regard for human life,” IDF Major Peter Lerner, head of Coordination of Government Activities in the Territories (COGAT) told Israel National News. “We have had reports of Palestinians being held at gunpoint in order to put them at the front, in order to increase the number of Palestinian casualties on the Gaza side,” Lerner said. “Hamas is doing it all the time.” According to intelligence reports, he added, the terrorists are stopping Gaza residents from evacuating their homes in order to flee the fighting. “Hamas is not letting… Read more »

Iran and now Hamas want to do with Israelis what Germans wanted to do with Jew?

Who the hell wanted to mess with the mosts sophisticated army. If it isn’t for the blockade i don’t think the Gazan would care less about Israel and what its doing.

“But the Hamas government in Gaza declared Israel completely illegitimate”

Do you really think that the stand from a puny loosely organized group would really affect a highly protected golden egg of the world.

How does the West respond to the obvious exploitation of Palestinian refugees? Soon after my meeting with Mr. Abbas’s chief of staff, I met with the ambassador of one of the West’s most enlightened countries. I asked: Why are the Palestinians not willing to help their own refugees? “I can understand them,” he answered. “After all, they don’t want the refugee problem to be taken off the agenda.” This reflexive “understanding” for the Palestinian leaders’ abuse of their own people is the heart of the problem. For decades, the international community has actively assisted in building the terrorists’ unique system… Read more »

I enjoy going into your website. But, with all due respect, you should stay clear from commenting on the Isreali/ Palestinian conflict, especially the biased reports.

Even the Arabs are distancing themselves away from it, so who are we to get involved?????

america needs to clear its weaponry stock. i kid.

as long as the palestine & the others islamic countries do not recognise israel and think the land should belong to them, the war will never end.

Anil, your header line declares, “Let justice flow like a mighty river”. If you asked the Buddha, He would have told you that compassion has to be tempered with reason, that the bleeding heart type of pathos can be self-defeating. Delusion and blindness. That’s why I very much more appreciate Susan Loones’s, “Integrity above Unity”, because that’s very much more profoundly true. You take the side of people who believes in mob solidarity and unity to get their ways not truth, the way of brutes. They expect that such unity will always be theirs to have but that’s not necessarily… Read more »

There, there are two sovereignties, each entitled to freedom of action within their territories and in the context of their customs and economies. But the Hamas government in Gaza declared Israel completely illegitimate. It also, as a matter of formal national policy, asserted it wished to destroy it and thus violate its sovereignty in the direst possible way. In this, Hamas is supported and abetted by its financial and weapons sponsor Iran, which shares the same profound allergy to Israel, and is clearly racing to create and enable nuclear weapons, which could generate precisely that devastating result. Iran and now… Read more »

Report: Al-Qaida No. 2 blames Obama for Gaza 6 hours ago CAIRO, Egypt (AP) — An intelligence monitoring center reports that Al-Qaida’s No. 2 leader is blaming Barack Obama and Egypt’s president for the Israeli offensive in Gaza. The SITE Monitoring Service says the audio statement purportedly made by Ayman al-Zawahiri was posted on militant Web sites Tuesday. It is al-Zawahiri’s first comment on the crisis since the war began Dec. 27. In a transcript of the statement released by SITE, al-Zawahiri calls the Israeli offensive a “Crusade against Islam and Muslims” and “Obama’s gift to Israel” before he takes… Read more »

Considering how much better prepared and organised the Israelis are this time around, there is good reason to hope that the result of the present campaign will be similar, namely an end to the rockets and the insertion of some kind of international force that will limit, if not prevent, Hamas’ ability to rearm. Judging by the intensive and very successful reconstruction activity that has taken place in southern Lebanon, such an outcome can only benefit both sides.

Listen, between you and me as Christians. Just get one thing straight: It was not only the Jews who crucified the Lord of Glory, but we, the non-Jews too. Why? Because of our sins. Keep this in mind so that you do not psyched yourself into anti-Semitism again. Non-Christians, including Muslims have a more balanced view that you. And the posts here by your readers, excluding mine should put you to … self-reflection.

My response to Khairy on his protest against Israel.

It’s bizarre and disgusting to see much of America’s media making excuses for a bloodthirsty, openly genocidal death cult. Something is deeply wrong with journalism in that country. “In the past week, the Fourth Estate’s Hamas cheerleaders have stripped away any pretense of being honest or neutral, with the New York Times continuing to take the side of the terrorist group in one of the most shameful journalistic episodes I have ever seen. In following the Times coverage for the past six months and checking external sources of information, one can see a clear pattern of propagandistic reporting favoring Hamas… Read more »

Anil, the so called “lull” was because Hamas was arming itself and replenishing its stock.

According to Umdat as-Salik, a medieval summary of Shafi’i jurisprudence, hudnas with a non-Muslim enemy should be limited to 10 years: “if Muslims are weak, a truce may be made for ten years if necessary, for the Prophet made a truce with the Quraysh for that long, as is related by Abu Dawud” (‘Umdat as-Salik, o9.16). Therefore, hudna can also be interpreted not as a peaceful move but as a tactical pause intended only for re-armament, paving the way for renewed conflict from a stronger position.

It’s always rich when one side sees itself exempted from observances of the Golden Rule and clings to such an oxymoronic ideology as “Holy War”. From that position, based on false premises, all subsequent evil follows. Then it’s always others’ fault!

Some people chose not to connect the dots and take responsibilities for their own action reveling in their own solidarity, right or wrong, mostly wrong. This is further emboldened and aggravated by leftist useful idiots outside their fold.

This is rich.
Israel violated the truce declared by Hamas cos Israel went after Hamas members. But Irael is not a muslim country, it never imposed any “hudna” (10 yer truce) which Hamas imposed on itself and then removed it.
Btw what “hudna” is this when Hamas was firing into Israel immediately after the hudna.

Who is at fault for the latest outbreak of violence is debatable and difficult to pinpoint on. Killing innocent mothers and children is definitely wrong!
Israel has always gone overboard with their responses, although Hamas, is not entirely innocent.
If rich Arab nations continue to be silent and America standing by the side of the Jews, no fruitful result will come about.
Malaysia and especially the muslim community, you can shout as loud as you like, the killing will continue….sad though.