Some 300 Pakatan elected reps and supporters have gathered outside the US embassy at noon to protest at the Israeli attack on the humanitarian aid flotilla heading for Gaza. It is the fourth protest today. 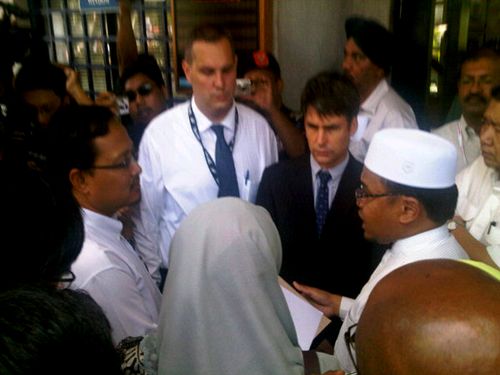 Pakatan MPs are demanding that Najib summons Parliament within 48 hours to debate the Israeli attack on the Gaza flotilla. The situation warrants immediate action, they say.

They condemn the Israeli aggression and demand that Najib terminates the Apco contract within 48 hours.

Earlier protests this morning by Perkasa (along with Malay-based NGOs) and Lifeline For Gaza at separate locations in front of the US embassy, drew several hundred people.

It was only just after midnight last night that Najib tweeted, “Just made a hard hitting statement against the Israeli govt for their heartless attack against the humanitarian convoy. I am so angry.”

Tell that to Apco as well.

Quick facts: 80 per cent of the people of Gaza rely on humanitarian aid; 45 per cent are unemployed.

More condemnation of the Israeli assault and the collective punishment of the people of Gaza.

Phua,
South Africa’s succesful because of the overwhelming support around the world including the United States. Furthermore, Nelson Mandela has allayed the fears of white by acceding to their request. Watch Inviticus.
Mandela kept the Green Boc, a remnant of South Africa past. Again, can BN government ever willing to keep certain traditions such as the chinese schools to allay the fears of minorities.

Total boycott of Israel and all Israeli-linked corporations. Just like the ultimately successful campaign against apartheid South Africa.

Meanwhile support should be given to progressive Jewish intellectuals in USA and Europe who are critical of Israel’s racist and expansionist policies (in the West Bank) such as Noam Chomsky and Michael Lerner.

For commentaries on the increasingly rightist Israeli regime, see
http://www.commondreams.org

We have more unjust happenings back home . Why cant we look at our backyard first. What was the motive were there other hidden agenda ? Anyway ALLAH IS GREAT he may have allow this to happen.

So where were these people when the Penans or the Orang Asli were raped & plundered?

Hello Anil,
It is unfortunate that things has come to this. Got an alternative read and video for you. “Freedom Flotilla: the Israeli side of the story” at http://www.thefirstpost.co.uk .
Regadrs,
Kiew

Quoting from the article: “Against a backdrop of previous attempts to smuggle arms into Gaza under cover of humanitarian aid missions, such intransigence raised serious fears amongst Israeli military leaders and politicians that history was in danger of repeating itself. Israel’s suspicious minds are not fuelled merely by paranoia: years of rocket fire and other terror attacks on Israeli civilians from within Gaza have left deep scars on the collective Israeli psyche, hence preventing further bloodshed on Israeli soil was of prime concern to all involved in the decision to intercept the Freedom Flotilla. If the activists truly had nothing… Read more »

Why even go near the lion’s den in the first place?

Oh! Well, finally the self proclaimed champion of Malays and Islam, Perkasa opened their mouths. Did they wave the keris? It is the correct time, and I am sure the US and their agents will be shivering when they see the keris waved by Froggie?

As a Muslim, I would like to advocate peace to all Human Beings in this world but as a human being i could not accept this wrong doings. Its time for all human beings to come together to teach this “Israel” a “MOTHER OF ALL LESSONS”.

No need to teach them a lesson. If god really there, then he will handle it using his ways at time when he thinks best.

Stop using this incident as the reason to show your aggressiveness or personal agenda.

See your contradiction ??? The peaceful one does not think of revenge. The peaceful one let his god to do the job. It is equally sinful to instigate others to do crime (eg war, retaliation) to the innocents public.