As speculation intensifies over the date of dissolution of Parliament, the relentless campaigning heads towards its final lap.

The Edge business website reports receiving text messages from unnamed sources speculating that Parliament would be dissolved on 22 February, and that’s the date being mentioned in coffee-shops, with many saying that polling will be held at the end of March. But then again, who knows for sure? People are just plain tired of this guessing game anyway.

But the campaign appears to be going full steam, all the same. A couple of people have received the following notice in their mail:

Some parents of pupils, meanwhile, have already collected their conveniently timed RM100 from the schools. Now there’s BR1M 2.0 coming up. Before that we had the smartphone rebates.

Najib and Rosmah meanwhile have visited Gaza in what appears to be an attempt to court the Muslim vote ahead of the polls.

Not to be left out, an MCA politician is trying to squeeze maximum mileage out of the New Year festivities. This photo from Media Rakyat. 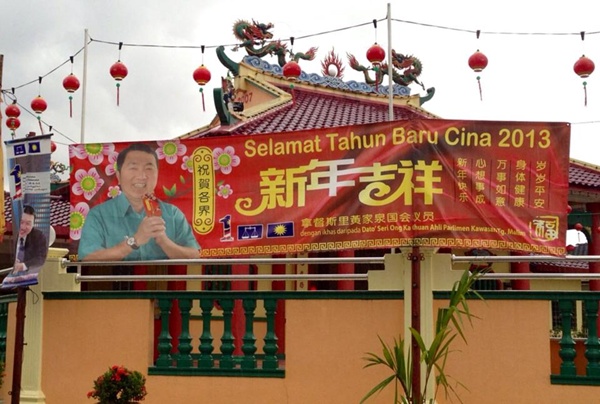 It appears to be neck and neck, if the UM survey is to be believed.

But it’s bad news from the Sabah front for the BN with the Royal Commission of Inquiry proceedings receiving some shocking testimonies (actually, not so shocking) of how foreigners were given identification papers in the 1990s so that they could vote in the state elections. That has put Mahathir on the defensive, and true to form he has diverted attention to Tunku and the pre-Merdeka citizenship arrangements.

And the next thing you know, Perkasa is talking about Bible burning. Don’t fall for the bait! It is so predictable they will use all kinds of racial and religious issues to divide voters (and opposition political parties) ahead of the polls. This is the Old-style Politics that Francis Loh discussed in this Aliran article, whose practitioners are terrified of losing ground to the New Politics (the multi-ethnic approach to issues of justice and governance e.g. Bersih 3.0, the anti-Lynas movement, etc). So the politicians practising the Old Politics of race and religion are trying desperately to make up lost ground.

Then another setback for the BN: another death reportedly allegedly involving the police. Not good. Malaysiakini reports: “Four police officers were alleged to have chased, handcuffed and then smeared turmeric powder on the face of a security guard, before beating him to death along with a mob at Taman Pekaka, Hulu Langat yesterday.” Now the response is there was no turmeric powder, the deceased had gone amok and – wait for it – he died of a heart attack! The Independent Police Complaints and Misconduct Commission needs to become a major election issue.

Meanwhile, the Felda Global Ventures share price plunged to a new low before bouncing back to RM4.51 a day later.

While over in Batu Caves, the controversy over the condo project turned into a hot potato. The Nut Graph attempts to dissect the issue, and both sides of the political divide appear to have a lot to answer in this case. Which makes you wonder: are the developers more powerful/influential than the rakyat?

Finally, the Selangor state government did the right thing by wisely cancelling the project. That shows that state governments CAN cancel projects when they want to or when they have the political will to do so without being liable to pay millions of ringgit in compensation.

Najib has douse the fire of Hindraf with BR1M?
Kingmaker no more for the Indians in Malaysia?

What is the sentiments of Indians in Penang long after the Kampung Buah Pala saga? Anil can provide some comment?

Whosoever calls for burning the Bible (God’s Words of Truth) is accountable to God.
Hot heads of trouble makers have no place in God’s Kingdom of Peace, Joy & Love.
Pray for Malaysia.
Pray for Peaceful & Bersih GE13.
And Pray that the Holy Spirit binds the itchy hands & foul mouths of trouble makers.
Cheers Kopi-O kau kau to all who persevere under these kinds of provocation.

Other things which RCI could stand for:

Hi everyone, It is going to be a very, very ‘dirty’ election! I know of people who have not registered as voters with EC, and yet, they discover by chance that they are voters on the electoral rolls!! Who has registered them as voters? Intent is possibly to pad the electoral rolls with a new category of phantom voters! What about those who have been registered by others without their knowledge and till today they are still not aware of it? There is (alleged) conspiracy by the EC and the Registration Department, if not, how else can such registration of… Read more »

That is why we must refresh ourselves with the main demands of Bersih 2.0 which BN has never worked on:

This video contains answers to Frequently Asked Questions and put the highlight back on the 8 Demands of BERSIH 2.0 — in simple lay person’s terms.

Chances are there’ll be 2 States. And when signed n sealed, citizens of both mus be looked after or protected by world community.. There are good Arabs and bad ones just as there are bad Jews and wise ones. Up to now delegates to talks are CHOSEN not by the people but organizers. Najib’s stint there is a waste of our money. So is his Davos trip. People like APCO or whoever ring the cash registers. As for investment, there’s not much promise in the West. Investors can only see growth here in Asia Pacific and some in Africa. If… Read more »

French Courts hv a problem with PM Najib over the Scorpene scandal. Will Msia and France an EU strongarm have smooth sailing with a BN win in GE13?

Wouldn’t, in comparison, EU have better rapport were PR to win?

Maybe Fareed would ask if the Durians are in season? Americans love Durians! ;-))

Hasn’t the bank employee who got sacked for predicting that the opposition will win gave you the idea of what all these people predictions that Umno/BN are up to with their predictions ?

People are joking that if the UM fellas had come up with a survey showing Pakatan in the lead, their jobs could be at stake!

Everyone can see that corruption is worse than it before 2008. It has also shown how UMNO has been weak and unable to take action against its own leaders who have been shown to be corrupt. There have been cover-ups in the NFC matter and we still do not know if the government has recovered the money given to them.

The chinese new year’s greetings for 2013 is now 新年”净”步 to pay tribute to the green movement agains Lynas and Pengerang!!!!

In my neigbourhood, Najib’s picture had been put up each time there was talk of election last year. These past weeks new ones are popping up again (just after Anwar had his ceramah)! For all intent and purpose, GE period is HERE..No one is going to take the legs off the peddle all the way through GE and well into even after taking office (its going to be hard punishing work from the get-go no matter who gets into Putrajaya). I still think Sabah is still a challenge and the local politicians can screw it up like they have done… Read more »

His visit to Gaza caused a diplomatic rift that drew a stern rebuke from Palestinian President Mahmoud Abbas who rejects and denounces the visit that undermines the representation of the Palestinian people, enhances division and does not serve Palestinian interests!