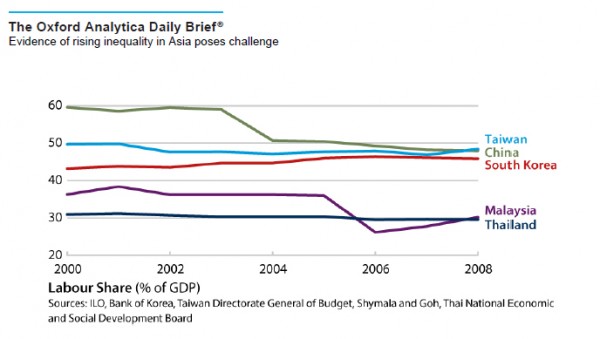 The other day, I received a message from a relative abroad. “Malaysia economy grew by 6 per cent … that’s huge,” he said. He was referring to the Malaysian GDP growth of 6.2% in the third quarter of 2017 compared to 4.3% in the same quarter last year.

I suggested to my relative that perhaps the growth was not being felt by many people on the ground. Perhaps the GDP growth was only trickling down (trickle-down economics).

There could be several reasons for this including high household debt, stagnant wages (after adjusting for inflation), the weak ringgit and the GST.

The economy may be growing but many of the factories employ migrant workers, who remit much of their (low) income abroad. This is happening at a time when local youth unemployment is hovering around 10%.

According to Bank Negara data (The Edge, 6 November 2017), Malaysian workers’ wages grew less than 1% last year. Even though the minimum wage was raised to RM1,000, labour’s share of the economy is just 35%.

While government statistics (the Gini coefficient) show the income inequality has dropped slightly over the years, the disparity in EPF savings between the rich and the poor has been rising.

The weak ringgit, especially, translates to more expensive vegetables and fruit and other imported items. This is the problem when the nation lacks food security and we have to rely a lot on imported food.

In addition, the Goods and Services Tax returns 6 per cent of consumption spending back to the government. The BR1M given to households earning less than RM4,000 is probably not enough to make up for the GST and the rising cost of living.

Household budgets are further squeezed when budgetary cuts and the removal of subsidies (in line with the neoliberal ideology) increase the cost of healthcare and education.

(The government reportedly spends less than 5 per cent of GDP on social services.)

Meanwhile, the majority of houses built cost more than RM250,000 — which would be unaffordable to many.

Expensive housing loans, car loans, and the higher cost of living — along with relatively stagnant wages — contribute to household debt.

While household income may have grown by 4.3% (in real terms) from 2014 to 2016, researcher Lee Hwok Aun says we need to really look at what are the components of the household figures to see if they reflect reality. The share of wages and salaries has dropped from 66.6% in 2014 to 63.0% of household income in 2016 (Malaysiakini, 6 November). Self-employment income too has dropped.

So, to sum up, neoliberal economic policies (such as the removal of subsidies and budget cuts on social spending), the rising cost of living and property prices and relatively stagnant wages have all taken a toll on the people.

What this means is that economic growth or GDP figures — and even the Gini coefficient, which measures income inequality — may not be a reflection of what many people are feeling on the ground. And it certainly does not include the social and environmental costs of pursuing such growth.

This article was first published in the Herald Catholic Weekly. 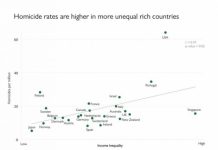 The rise in living costs is God’s will, said an Umno leader and Domestic Trade, Cooperatives and Consumerism Minister Hamzah Zainudin. He quoted a saying, or hadith, attributed to Prophet Muhammad which states: “Verily, it is God who sets prices, who makes things hard, easy and gives out blessings”.

BN or Pakatan victory means little to the progress of Malaysia according to link below?

No wonder most people already grown tired or fatigue with them tussling for power.

Anil may have different opinion?

Even if Pakatan wins, we really need more people-centred policies and sustainable development.

Let’s change government first. BN has taken rakyat for granted for too long!

It does not matter what politicians, corporate captains tell us in the run-up to the polls. Disregard their words of advice because they have their own motives for their “advice” Our vote is ours to give. Has life improved in the last five years? https://www.themalaysianinsight.com/s/26073/ Checklist: Do you go to sleep and wake up troubled by worries about cost of living more than at any time over the past five years? Have you and your family been forced to change your diet because your ringgit doesn’t stretch as long anymore? Are you happy with the space to practise your religion?… Read more »

Time to reject Umno-BN in GE14.

Yes to all your checklists.

So please influence our fellow voters not to give our votes to BN. Enough is Enough! Must counter the lies and SPAM by Umno!

INCOME AND INEQUALITY IN MALAYSIA

The United Nations rates coefficients higher than 0.4 as dangerous levels of inequality. A coefficient of below 0.2 constitutes equalitarianism.

But EPF savings coefficient suggest inequality is growing. Household income includes transfers and property income, whatever that is.

Malaysians have been complaining about cost of living in the country.
Which, they say, this has made life hard for everyone.

Relevant article by Kua Kia Soon on the various con jobs and the peoples’ travails.
http://www.freemalaysiatoday.com/category/opinion/2017/12/08/will-bn-or-ph-reclaim-our-commons-and-redistribute-wealth/

Umno said ordinary rakyat has ‘no expertise’ to comment on cost of living. I guess we have to depend on expert Anil to explain the difference between cost of living vs cost of lifestyle.

Nah, you don’t need to be an expert to understand the price tags when you go to the market or eat out.

Cost of coffee beans on the rise, so your typical Lorong Susu kopi O (cost of living up) and starrybuck frepuccino (cost of lifestyle up)

Unmo is really arrogant as seen in the behaviour and speeches at its assembly. Now it is insulting our intelligence as though we cannot see price hike and high cost of living. I support Sheila Majid who is not afraid of being banned by TV3 and Jom Heboh! Malays must speak up against Umno!

Free food provided at Umno Assembly, and for a moment all delegates somehow forgot about escalating food price?

Strong headline numbers on the economy, which the government and private economists are projecting to expand by as much as 5.7℅ this year, have done little to blunt the negative sentiment because sharp spikes in the cost of living are weighing heavily on household incomes, particularly in Malay rural communities. All of this is making the outcome of the next national election difficult to call. Professor Shamsul Amri Baharuddin, who is the director of the Institute of Ethnic Studies at Universiti Kebangsaan Malaysia, acknowledged that the odds might appear to be stacked against Umno. “But Umno is effective when the… Read more »

Allowing massive inflow of immigrants serve many purposes: 1) Give greedy + heartless employers a chance to employ at lower labor costs 2) May create loopholes for those in authorities to gain from immigrant labor enforcement via corruptions 3) Great … opportunities for ‘threat of imprisonment’ by those irresponsible who have authorities to check on ‘wai lao’ while on street ronda or Sunday sweep at shopping malls or ‘wai lao’ rendezvous. 4) Political shift of voters make-up via increase in immigrants-turned-Malaysians with a choiced religious affirmation. 5) Human trafficking in the guise of immigration for lucrative prostitution & child labor.… Read more »

Employing the foreign workers is not much cheaper than employing the locals.The reason why employers are more inclined to employ foreigners is that they want their jobs and work to keep them compared to Malaysians.As to why unemployed Malaysians are less keen to keep their jobs,you tell me.It is definitely not due to reasons given by the politicians or MTUC.

– Apartheid and related low status of jobs – the same people are willing to do these jobs overseas or on ships.
– Low wages.
– Extreme danger and lack of protective gear.

The cruel exploitation of foreigners (to the detriment of local workers) requires the diplomatic staff from the country concerned to play dumb. How many of those who thereafter took up the Malaysia My 2nd Home scheme benefitted?

Tough time for parents to buy stuff for chidren for school and bas sekolsh fare to go up also.

What is the basis of the inflation and unemployment figures claimed? In other countries, critics ridicule these and other figures. Why was COLA eliminated? Why were unions neutralised? What was the net benefit of globalisation? Why are we still pursuing TPP? How relevant is employment to someone who cannot work? How many jobs that can support a family are available? How many have lost their jobs in the last 10 years? What is the future of jobs in view of the various forms of rationalisation and automation? An ordinary family may become destitute through a criminal disaster such as disease,… Read more »

Can 6% growth overcome the public’s fear of losing jobs and immigration concerns?

Awang Selamat ori can explain to us ?