Party whips should not not be imposed and MPs should be allowed to vote on the TPP according to their conscience next week. But I would like to know the stand of each party and each MP.

I, for one, am convinced the TPP is going to be disastrous for the nation. Not only will it lead to higher healthcare costs, it will also enhance the power and influence of the MNCs and conversely, erode our economic sovereignty.

Look at today’s TPP protest and check out which parties, which MPs participated.

The Malaysiakini rolling report mentioned reps from Pas, Amanah, PSM, PKR, apart from groups such as Bersih, Perkasa, medical patients’ group Malaysian Treatment Access and Advocacy Group (MTAAG), PKKIM Ikhlas, Abim and Isma, participated in the rally. (One activist, Amir, is believed to have been detained – why?)

Sadly, we know how the BN MPs are going to vote on the TPP.

We also know PSM, Pas and perhaps Amanah are against the TPP.

But what about MPs from the other parties?

Do they subscribe to the neoliberal logic of this so-called ‘free trade’ pact in the belief that it will result in higher investments – something that is highly questionable. (By the way, is a long-term monopoly on drug patents that prevents competition from generic medicines part of ‘free trade’?)

Will the TPP improve wages and living standards and create more jobs or will it put added pressure to keep wages low? Will jobs be lost to lower-wage nations?

Will the TPP result in more value-added production or will we become an assembly line for MNCs with little value added? Will the share of national income going to labour drop and move to capital?

Worryingly, the TPP will expose the Malaysian government to multibillion ringgit lawsuits in opaque overseas tribunals by MNCs that feel their future profits might be threatened by government policies aimed at protecting the public interest or the environment.

All MPs must turn up in Parliament and each must make public his or her stand so that we can all judge who is protecting our interests. 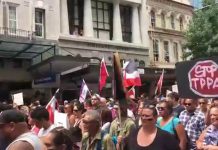 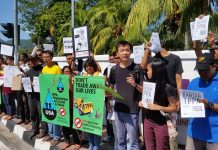 When the sly rules of the game are spelt out in American lingo & snake in a maze of surprises & compromises, who will be at the losing end? When they can easily nullify effective Asian traditional medicine in favour of big pharma super-expensive chem-laced medicines, our natural Tongkat Ali will be rendered useless but as old man’s tongkat. When they can shove down our throats their big Chevrolets or Buicks, no need to assemble local brands that drink less petrol. They can also shove their Texas oil as a combo. When these Red Necks can protect their farmers to… Read more »

The real demand to be made is how come no.opposition member had asked much less make the most important case why Malaysian are not ready for TPPA. Countries who are poorer, less experience and more challenges in international trade and development like Vietnam, Peru, Chile, and those who make a lot of noise about trade no.matter what like AU, NZ, US, are hearing less noise about TPPA.

What should be easy for us, like Singapore, is so hard? Whose fault is it!

SingLand needs a Big Brother in US, so what’s so hard except when its citizens decide enough (of hardship from TPPA) is enough comes general election.
Also, a Kia Su nation will never say no despite the odds to come.

Singapore is able to stand up to global challenges because its workforce is competitive and productive. Singapore firms adopt innovative ideas for continuos improvement, while attracting good talents even from Malaysia. The Singapore government controls the intake of foreign labour, and helps its SMEs to expand to places like Vietnam. Most Malaysian SMEs choose the easy way out employing cheap foreign labour to sustain their old trade and suddenly wake up to realise how far behind they are in the globalised world.

Someone wrote that one way to gauge possible future impact of TPP agreement would be to look at
the effects of NAFTA on Canada and Mexico.

the rally is only a few thousand.

From observation and peoples` view, the common people are getting fed up with these opposition and NGOs.
Its a good sign. !!!!! and I am very happy about it.

Still using black and white tv? Must be worthy now as most are using Colour tv with multi colours and some with high definition.

The Malaysian SMEs that have been relying on cheap foreign labour without focusing on automation for efficiency and productivity will be hit by the coming minimum wage system and the TPPA.

How do you compete with the more productive foreign corporations that also play the unfair advantage of their own rules of the game? It’s like asking our speak takraw players to play American football (a rugby football) at the Super Bowl. This is not what a global trade should be, nor should it be ‘so open’ to all kinds of intrusions into local markets without regards to different levels of playing fields. No wonder China is not invited to TPPA b’cos China knows how to play the Fine Art of War whether in trade or in battlefield. We are not… Read more »

TPPA enforces copyrights ownership. Our university students depends on pirated software’s as original ones they cannot afford as meals comes before computer software’s.

If foreign companies can offer better job/wages and competitive products/services while operating in Malaysia under TPPA, then we should not complain, right?

TV1 allayed the fear of Malays towards TPPA by saying that Felda, Tabung Haji an KWSP are all exempted from TPPA. Can someone explain how to get exemptions?

TPPA in Malaysia means ultimate death to all Pasar Malam counterfeit dealers.
Wai loa will cry every pasar malam night as their lifestyle will have to be downshifted further plus the depreciated Ringgit to send home via Western Union.
How to catch / upgrade living standards when most are still earning low wages?

No need to worry for those Pasar Malam traders as Ismail Sabri has been promoting buying ‘Ori’ instead of counterfeit goods (with his reference to the celup smartphones at Low Yat and Kota Raya?).

Wai Lao need not worry, as I have seen enterprising traders bringing the goods (grocery items, vegetable, chickens) for sale right at the doorstep of their construction quarters.

It is the nature of evolution that those inefficient SMEs (that has refused to innovate or improve efficiency but banking on cheap foreign labor) be displaced. Threats like TPPA did not emerge overnight.