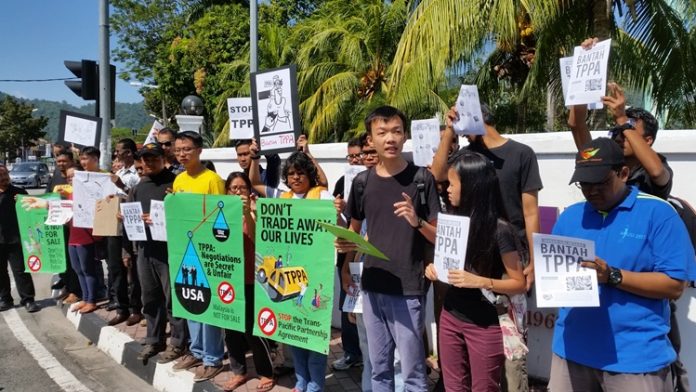 The protest was held as International Trade and Industry Minister Mustapa Mohamad visited USM in Penang this morning to brief students, village and community leaders, business representatives and politcal party members on the trade deal.

During the briefing with students, one of them asked the minister how he could be sure the TPP would benefit the people. After all, she said, the government had also said the GST would be good, but instead it had burdened the people with higher prices.

To this, Mustapa claimed that the GST is actually good; it was just the implementation that was weak in some areas and this had allowed some traders to profiteer.

The student also asked Mustapa if the extension of the period for patent rights under the TPP would lead to higher prices. Mustapa said there would be no extension and any price increases would be due to a weaker ringgit.

Such replies have not convinced the activists.

Outside, reporters crowded around the activists staging their protest as several took turns to explain why they were opposing the TPP. Among the major concerns were that the TPP would result in greater corporate control of the economy and result in higher costs of healthcare.

A couple of familiar faces from Perkasa-type groups were present though. One of them, Mohd Ridzuan, interrupted the protest and asked the activists why they were gathering there when they could have voiced their concerns inside the hall during Mustapa’s briefings.

“We can discuss that later,” one of the activists told them. “Right now, you are disrupting our protest. We are addressing the media now.”

Unit Arif members in orange vests – a new group set up by Parti Amanah, equivalent to Pas’ purple-vested Unit Amal – helped the activists to control security and ensure traffic was not blocked.

Representatives from Penang-based NGOs such as the Consumers Association of Penang, Empower, Pan-Ap, Aliran and Penang Forum were also present, and a couple of them spoke. PSM, PKR and Amanah reps also participated in the protest.

The protest ended peacefully after half an hour.

While it is claimed that Malaysia’s participation in the TPP would result in larger GDP gains, the country’s trade surplus would be much smaller under the TPP.

In 2027, the trade balance is projected to remain in surplus following Malaysia’s participation in the TPPA.

“The size of the trade surplus will be smaller at US$29.7 billion to US$35.1 billion, compared to the baseline scenario of US$41.9 billion where the TPPA does not exist.

Parliament is expected to discuss the TPPA 26-28 January, and the TPPA is then scheduled to be signed in New Zealand on 4 February.

The Malaysia cabinet then has up to two years to ratify the agreement and come up with enabling legislation.

The TPPA will come into force when six of the 12 nations ratify the agreement. These first six nations will then call the shots when dealing with those who have not yet ratified.

How to join TPPA when you still have the racist policy of NEP?

Fresh from their court loss, several Malay groups announced plans to hold a demonstration at Dataran Merdeka this January 23 against the Trans-Pacific Partnership (TPP) agreement, hoping to the move would stop Putrajaya from signing the controversial trade pact.

This video is likely produced by Umno as it attempts to dispel the fear of TPPA among the Malays.

Umno has been promoting TPPA to Malay folks on its TV3 daily.
When (some of their supporters) operate overseas, likely they will ask for 6-month free rental?

Not only 1pm selling our bandar to the chinese communist but 1pm is now selling the rakyat to TPPA!!!

Dig your own grave and vote 1pm and BN again in the coming election, will you chew jetty clans, MCA supporters ???

Sign up TPPA means Hollywood copyright enforcers may raid illegal pirated DVD shops for copyright infringements, whether our local authorities like it or not. They may check out Pasar Malam illegal stalls. Don’t play play with Uncle Sam localized in operation later!

TPPA will allow local movie companies like KRU to penetrate US market with Cicakman? Disney could possibly purchase the rights of Cicakman to join the Marvel essemble of superheroes to be recognised by the Nusantara audience. Boboiboy could even take a slice of market away from those Cartoon Network in US.