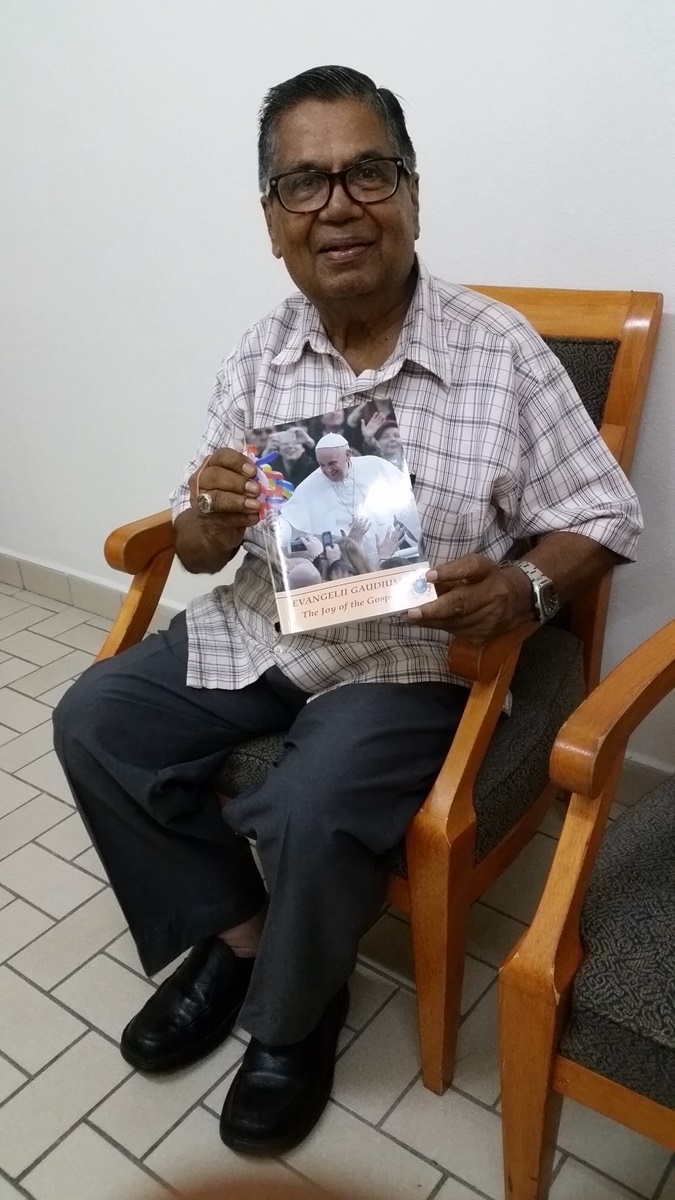 Cardinal Soter Fernandez, passed away at 12.35pm today aged 88. A humble man, he led the Malaysian Church with a steady hand, always passionate about authentic human development, social justice and interfaith dialogue. I wrote the piece below four years ago, soon after Pope Francis installed him as Malaysia’s first cardinal.

It seems altogether fitting that the archbishop who championed the ministry of justice and peace in the Malaysian Church should be installed as cardinal by Francis, the Bishop of Rome, on 19 November, which coincides with Bersih 5.

This is a piece I wrote for the Herald a few weeks ago.

Last year, when I met Archbishop Emeritus Soter Fernandez, he took pains to highlight two somewhat related areas that he seemed to be concerned about. He carried in his bag a clutch of documents relating to the Aggiornamento in 1976 and the present Bishop of Rome’s encyclical on the Joy of the Gospel.

It was evident that Soter was concerned about the direction of the Church. That 1976 gathering of the local Church had discerned the need for Christ-centred communities along with four related needs: unity among the faithful, formation, dialogue between Christians and those of other faiths and integral human development of the poor.

When I heard the Vatican had decided to elevate Soter as cardinal, I recalled what he had highlighted. This, of course, is an honour for the Malaysian church but, by now, we should know that the Bishop of Rome’s every major decision is laden with deeper significance.

At the fourth Peninsula Malaysia Pastoral Convention in early October, Aliran president Dr Francis Loh, in his keynote address, reminded the delegates about the Bishop of Rome’s use of the metaphor of the Church as a a ‘field hospital’, ministering to ordinary people.

Who better than Soter to understand this profound metaphor in all its depth. Having started his working life as a humble hospital dresser in Kuala Ketil estate in Kedah, Soter later worked as a hospital assistant at the Penang City Council’s tuberculosis centre along Perak Road. So he knows what a real ‘field hospital’ is all about.

As a hospital dresser, the young Soter would have come into contact with people on the ground and in touch with the difficult realities of society. He would have experienced the joys and sorrows of the people and their distress.

“I understand the grief of people who have to endure great suffering, yet slowly but surely, we all have to let the joy of faith slowly revive as a quiet, yet firm trust, even amid the greatest distress…” (ref. 6, Joy of the Gospel).

So it is not surprising that some of the archbishop’s life-long friends include people of other faiths, Christians from other denominations and even lapsed Catholics disillusioned with the direction of the Church. Many of them have been touched by his unassuming humility, simplicity, pastoral concern and concern for the poor — the very qualities the Bishop of Rome has been looking for in bishops and cardinals. No wonder these people on the margins were among those who were most elated at the elevation of Soter as cardinal.

As it turns out this, the sense of pastoral inclusivity — the sort that Soter advocates —was one of the key buzz words of the recently concluded Fourth Peninsula Malaysia Pastoral Convention.

But there is much work to be done. Said one priest, “Personally, I am neither elated or dissatisfied (with the outcome). I only hope that the way forward involves proper implementation and greater empowerment of the laity.”

The challenges are many. Soter’s favourite Joy of the Gospel contains the following great themes: “No, to an economy of exclusion and inequality, No, to the new idolatry of money, No, to a financial system which rules rather than serves, and No, to the inequality which spawns violence.”

Soter’s concern about the direction of the Malaysian Church was diplomatic but it spilled over in the choice of passages he highlighted in the Joy of the Gospel. He pointed to what the Bishop of Rome said: the missionary impulse today means channelling the Church’s energies and ways of doing things into the “evangelisation of today’s world rather than for her (the Church’s) self-preservation.”

Another passage: We must make ordinary pastoral activity more inclusive and open so that pastoral works can reach out to all those Jesus wants to be friends with. That means we should not fall prey to “ecclesial introversion,” as St John Paul II put it (ref. 27)

Soter noted that Francis wants us to abandon the complacent attitude of pastoral ministry that says, “We have always done it this way.”

Going by the relative small number of Catholics in Malaysia, the conventional wisdom is that the local Church does not warrant having a cardinal. But the Bishop of Rome has been anything but conventional in his decisions.

It is more than just an honour to the local Church. Francis is sending a message about the universality and geographical diversity of the Church. It may also be seen as an encouragement and source of joy for the local Church, still reeling from the ‘Allah’ issue and facing challenges arising from creeping Islamisation.

Archbishop Soter’s deep concern for social justice issues mirrors the choice of new cardinals in the United States, who have put such issues at the fore-front ahead of hot-button doctrinal issues.

The new US cardinals, for instance, have respectively been pushing for gun control, advocating greater concern and compassion for refugees, and supporting the cause of ‘rebel’ nuns working in the periphery and among the poor — nuns who had previously been under Vatican investigation for their controversial work among the poor.

Soter’s journey with the bishops, clergy, religious and lay faithful has been prophetic as the head of the Malaysian National Office for Human Development (NOHD), Office of Human Development of the Federation of Asian Bishops’ Conferences, Caritas Asia and Caritas Internationalist in Rome.

Soter took a risk in steering the Church in prophetically promoting human development especially via the then NOHD. This work eventually led to the ISA detention of NOHD head Br Anthony Rogers, FSC and other church workers during Operation Lallang in 1987.

“A pastor with a deep contemplative spirituality open to listening to the world, others in the church and in our nation,” Rogers reflects after all these years. “This is what moved him to be a shepherd with a compassionate heart and most significantly as a voice of the Church of the Poor in Asia and for the nation.”

It was this contemplation and compassion that moved the Church to be filled with courage and thus become a beacon of hope amidst darkness, fear and total silence of our nation especially during the dark days of Operation Lallang, adds Rogers.

Soter’s elevation as cardinal should be seen as recognition for his life’s work for the cause of Justice and Peace as the way of the Gospel today after the Second Vatican Council. More than that, it should set the tone for the Church in Malaysia and the rest of the region.

The elevation of the 17 new cardinals will take place on November 19, coincidentally, the same day as the scheduled Bersih 5 rally. It is a sign of the times that the Bishop of Penang Sebastian Francis has encouraged Catholics in Penang to participate in Penang Bersih 5 activities on October 8-15 at a time when the country is facing a serious moral crisis and a lack of integrity as evident by the huge corruption scandals, including 1MDB.

Still, there are some who are sceptical whether the deliberations at PMPC IV can be put into practice: “One can talk about an inclusive Church but being inclusive is something else,” said the priest mentioned earlier. “I feel the social teaching, namely social justice, will still remain as an appendix of the local Church.”

All the more reason for us to draw inspiration from Soter’s elevation as cardinal and remove that appendix. Instead, we have to put it at the forefront — so that the Malaysian Church really lives up to the preferential option for the poor and disseminates its “best kept secret” — the social dimension of the Gospel. 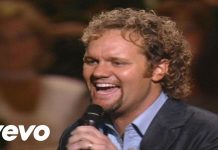 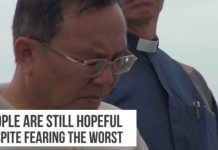 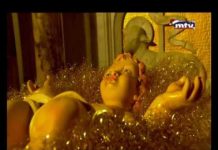 I am OK. Thanks for the concern, Ray. Just been occupied with other work. Hope to write soon again. Hope you folks are well.

Meanwhile please do not withdraw from your EPF account 1, let your money grow for retirement needs. Today banks offer little or meagre interest for your savings.

The interest rates available to ordinary people are typical of the “free” market: collusion instead of competition.

By Mujahidin Zulkiffli The bigger danger of hudud to Non-Muslims. I’ve highlighted some potential indirect consequences of hudud to non-Muslims in my previous post. Now this is a bigger one. It opens a question as to whether the country is a secular or an Islamic country in practice. Why is this dangerous? Because it may pave the way to bigger and crazier things to happen such as how we officially treat non-Muslims. In a typical Islamic country under Islamic administration, the non-Muslims are divided into a few categories: 1) Kafir harbi fi’lan: These are non-Muslims that are physically hostile (waging… Read more »

Good news. Hope will bring peace to the world. Religions should unite not divide. What say you Anil?

Yes, of course, religions should bring people together and unite the world to face the many challenges of our time.

A major and lucid explanation of the true goal of Operation Covid: to bring China under control of the Dollar Empire:
http://www.informationclearinghouse.info/55703.htm

Amazon 2016 ad: Priest and Iman meet for a cup of tea in UK.
https://youtube.com/#/watch?v=Ouu6LGGIWsc