A dramatic day for the nation … and it continues. Aliran has just released a statement:

The Agong has never to our recollection so openly rebuked the government of the day.

The whole nation now knows the government misled Parliament and the people on 26 July, when de facto law minister Takiyuddin Hassan told the House that six emergency ordinances had been revoked on 21 July.

The palace now says the Agong was not consulted before Takiyuddin’s announcement in Parliament.

Aliran is appalled at this shocking turn of events. It means the so-called ‘revocation’ was made without going through the proper procedure stipulated in the Federal Constitution. Full statement on Aliran website

What do you all think?

Its a Political Chess Game being played and a very cool unassuming PM Mahiaddin seem to be winning.

It is a mistake to say that the Palace has never openly rebuked the government of the day. Interference by the Palace … flared into open insults during Mahathir + Anwar rule known widely as the Constitutional Crisis in 1964. It only simmers down when Mahathir’s admininstration altered some of the Article in the Constitution with regard to the role of the Raja2 Melayu and the Agung … So, why is the PH politicians trying to fish in the murky waters they knew no fish can survive like now. Who are trying to follow, the Constitution or the Agung?

Anil’s rate of posting recently is a stark contrast from previous months. I will not be surprised if its motivated by the return of Tunglang. His long slumbered “inner journalism” has been fired up at the unexpected sight of his long forgotten but dearly missed “loyal reader”.

“Hard times create strong men, strong men create good times“ Perhaps if Tunglang tries a bit harder, Anil may find the courage and purpose to volunteer himself as candidacy in the next GE, where I hope, together with collective prayers of this blog, that “Justice shall finally flow like a mighty river”. 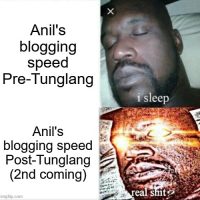 tunlang just parrot from western news oredi third or fourth hand – like stale bread. Further he did not do any analysis, only KBKB. STAR former editor did better. Ttry harder so that he can join moo’s team like wong or wrong.

The deputy prime minister does not automatically take over if a prime minister steps down, according to an academic, as politicians and others continue to call for Muhyiddin’s resignation.

Dr M amended constitution in 1980 to make PM with executive power limiting Agong’s power.
So he is thecteal mastermind until now, Anil do you agree?

He was the mastermind back then, but his proteges picked up a lot from him.

No scent, sense, sen, cent and sent. His son lost the MB of a state and tunlan still think he can be PM when he cant be a MB??

The scenario may not be that staight forward.

Who is/are the behind the scene Bolehland Mastermind(s) ?

However, with social media so active the jigsaws to complete the picture are taking shape?

Disgraced and fallen ones can at least find solace in weath accumulated.

Taki is solely responsible for the mess.
PM8 is accountable for it.
Both must resign for violating Rukun Negara – Kesetiaan kepada Raja Dan Negara.