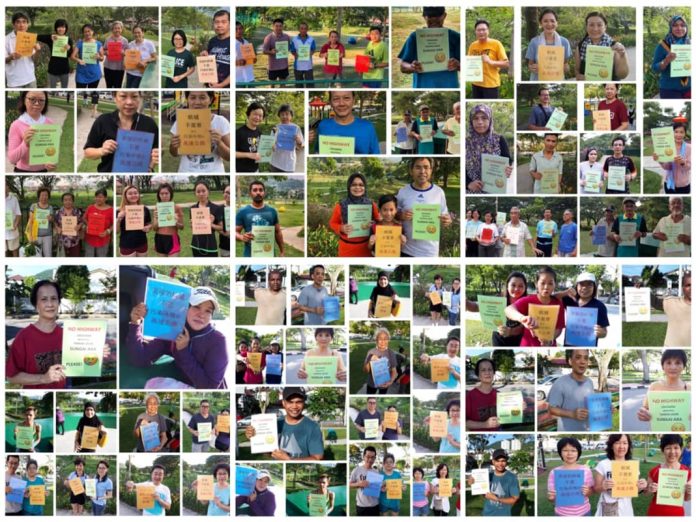 The state government, in trying to defend the mega Pan Island Link highway project (proposed by a major contractor and two Penang-based property developers), has lambasted critics for posting “misleading visuals” which it described as “fake”.

It then showed a ‘genuine’ visual of the highway over the Youth Park – a view from above and from a distance – taken from the environmental impact assessment of the RM8-9bn highway. But where are the visuals of the massive six-lane highway from ground level inside the Youth Park so that we can see this behemoth in all its concrete glory? Why not show us this instead of a fancy artist’s impression (from a distance, from above) of a small Penang Bridge-kind of highway gliding over a sea of greenery looking oh-so-picturesque. Who is misleading whom? We all know how ‘genuine’ artists’ impressions can make even the most monstrous projects look so appealing and green.

Where are the ‘genuine’ visuals at ground level of the six-lane elevated highway along Gottlieb Road and Bagan Jermal Road in front of the Penang Chinese Girls High School and the St Nicholas School for the Visually Impaired?

Was a visual impact assessment done?

As for the visual of the highway flying over the Penang Hill railway, wasn’t this what the Penang Transport Council, of which I am a member, was told? We were told there would be a 2km elevated stretch hugging the hill above Air Itam flying over the Penang Hill railway and an area behind the Kek Lok Si. When was this changed to a tunnel below the hill railway? Were all the council members told of this major change in the plan? How will the extra length of the tunnel to over 10km (from over 7km previously?) affect the cost of the highway?

I blogged about that amazing flyover 19 months ago in January 2017 and put in an image someone had designed (with the caption “an artist’s impression”) depicting the flyover over the hill railway? Why did it take 19 months for the state government to say that image was false? When was the plan changed? Where is the ‘genuine’ visual of the tunnel beneath the hill railway?

In any case, wasn’t it true that this 19.5km highway was first supposed to be four-lanes and then extended to six-lanes and then the tunnel lengthened to over half (over 10km) the distance. What was the increase in cost each time such a change was made? Who decided on these changes and approved the extra cost? Was the Penang Transport Council briefed on the changes in cost each time? Did they agree to the changes?

This is why I say the Penang Transport Council is useless, a sham. Just a top-down briefing session with state government leaders listening with much awe and reverence to the representatives from the contractor, even though the ‘project delivery partner’ agreement had not yet been signed. Strong objections about conflict of interest were just met with stony silence or with less-than-convincing responses.

Let’s get something straight: it was civil society groups in Penang who asked the state government to come up with a transport masterplan. The Halcrow transport masterplan, drawn up at a cost of RM3m, was then adopted by the state government as its official blueprint. Nowhere in the Halcrow masterplan was there any ‘Pan Island Link’. But then this major contractor and two Penang-based property developers came up with their exorbitant proposal for an RM8-9bn highway project ….

Our train service – the lost generation

No concept of carbon footprint among Penang people. They all mostly want convenience of easy driving on wide roads.

As if the usual Friday afternoon protest at Komtar is not enough.

What sticks in my craw is the fact that the State Government believes they were re-elected in 2018 because Penang people support their version of the transport plan!

Opportunistic moment for remnants Gerakan+MCA+MIC to make their stands on present transport plan, and not wait for NGOs to counter or wait till closer to GE15, and prove to concerned Penangites they can fight head on without so called 1MDB financial funding! Otherwise dooms day ahead for them.

Gerakan, MCA & MIC is now in GE13 + GE14 fatigue.
Might get into chronic depression sooner before GE15!

Thank you Anil for this important revelation providing factual clarification.

Artist impressions = a visually aesthetically created scene of a place, interior design or landscape with a purpose to impress the viewer towards a positive impression (or favourable judgement) with the hope of a response in purchase, feeling good aspiration (lifestyle association) or trust of design proposal. There is no legal constrain nor moral conscience on the part of the artist NOT to create WYSIWYG (what you see is what you get) BUT to influence viewers towards the above mentioned response in the name of commercialism. Neither is there an obligation NOT to alter an artist impression to the extreme… Read more »

Keep up the good work. Disgusting development by this government.

It might be disgusting to you, but glorious good news to those who enjoy driving freely without traffic congestion on the Penang island, cruising comfortably or ramping fast and furiously.

There seems to be quite a lot of banter going back and forth on this PIL project. After all the hoo haa that has been going on for sometime now, no one has suggested anything positive. We could keep talking this way till the cows come home and still nothing would come out of it. Allow me my two cents worth. Let a group of experienced people(at least three groups) from the UK, Japan,China, Korea, and Germany to carry out a detailed feasibility study of the plan and produce a working paper. The main condition in the plan would be… Read more »

How come the majority of Penang folks are quiet about this? No awareness or really not an issue but and overblown matter by a small minority?

I read The Star but Wong CW and Joseline Tan never make noise about this.

Also that Huan guy of PCM has retired or what, never complain about this?

If you have been living in Penang in the last 10 years you may not have noticed the high increase I car population on the island.

I visited Penang last week after my last visit in 2006.
Wow! There are now so many cars on the road. The locals majority do not take public bus but prefer to drive.

No wonder your government is building more roads.

In tunglang’s good old days, bicycles or boon siew kapcais are king of the road . tunglang even own a good bicycle. Ask tunglang, why pg lang change mindset? Past bicycles and now cars? Tunglang now most want to drive cars and eat in uncle Donalds. Soon traditions and heritage will be gone

While I admire Anil’s courageous in demanding the government to implementing whatever his groups think is the best for Penang with good intention, I felt that this is not going to bode well for everybody including Anil’s group. There seems to be no middle ground where everybody can come to consensus. Hence, I can say Anil’s group is equally sham abd useless too. That’s the reason why people sometimes get numbed over the past 60 years voting for BN. The same silent majority voting for Trump now. Tell me Anil……..What are those that you are willing to sacrifice for the… Read more »

We are just asking for an independent review by an international body of sustainable mobility experts such as the ITDP https://www.itdp.org/

They can review the Halcrow transport masterplan and the RM46bn proposal put up by the contractor/two Penang property developers before we spend such a colossal sum that would affect so many people and the environment.

What is so difficult about that?

Anil, keep up the good work. Awareness is the first step to right the wrongs. If someone says it’s fruitless, let him be in his own limbo. We as individuals knows what to do, & collectively we are a force to be reckoned.
PM Mahathir knows this awareness game too well not to stay limbo in Pulau Langkawi. See his fruits as against someone’s limbo.

How to review? Data and figures have changed over time? What they predict figures may increase or decrease. Also, different experts have different opinion. halcrow being pommy prefers fish and chips. If call French they want fries French fries. Malaysians prefer rozak but indons want gado gado

Come September, after the end of tax holiday, expect to pay SST for your roti canai/teh tarik at Mamak outlets as they make more than RM1,388 daily. This is no fake news.