Today, not only has the rate of increase in the increase in the number of cases fallen, the absolute numbers for Penang and Malaysia have also plunged. In Penang, only two new cases, as the total inched up by just 3% to 68. For the whole of Malaysia, the rate of increase fell from 16% yesterday to 7% today ie just 106 new cases, bringing the total to 1,624. The number of new cases today is the lowest for 10 days  (see table below).

So far, Malaysia has just 50 cases per million people, compared to Japan 9, Thailand 12, Canada 55, China 55, Australia 84, Singapore 87, UK 98 and South Korea 176. (The caveat is that some of these countries eg South Korea have done a lot more testing of their people, though Malaysia too is ramping up its testing capacity – see video above.)

It helps that we seem to have a highly competent Ministry of Health director-general in Dr Noor Hisham Abdullah, who has gained respect for his poise and his ability to say all the right things. Find out his background here. In fact, the Ministry of Health top staff appear to have a handle on the situation; so too those involved in contact tracing, especially those involved in the tabligh gathering. Tracing those thousands of attendees and then persuading most of them to come forward for testing surely ranks as an impressive feat (even though that gathering should never have taken place, like other mass religious gathering of all faiths in the region).

Dr Jeyakumar Devaraj, meanwhile, has been writing some interesting articles for Aliran in recent days. His latest piece touches on the treatment of coronavirus patients and looks at the need for different treatment strategies at the initial and later stages.

Those 10 millions face masks from China? Apparently, they are to be bought at RM1.18 per mask -which seems a bit high. And the plan now is to distribute them for free. Let’s see how that pans out.

Our efforts at staying at home seem to be bearing fruit. So let us not let down our guard. 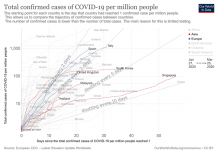 Farmers in Cameron Highlands are donating vegetables to poor and elderly here, which they would have otherwise had to dump due to difficulties in supplying other states during the movement control order (MCO).

Failure of PN’s Ministry of Agriculture and Food Industries?

PF has been talking a lot in the past. Very good if do something rather than talking. What about those making noise about sustainability? People can talk but not do include me. No wonder virus spread so fast with open mouth and air droplets.

Now, again the stampede has just started at Supermarket. The govt with its inconsiderate and harsh “announcement” of a straight 14 days MCO is the cause !
Why can’t they simply add in a clause like “we shall revoke it (immediately) as and when the situation is deemed greatly improved !” That’s the solace, at least to Rakyat’s heart !

If man man lai, Pnang lang will flee like those in Wuhan and now it spread to USA and Europe. Gomen should look at the area with very high cases and lock them.

Top US execs dumped $9B of stock before Corona virus hit

Amazon CEO Jeff Bezos saved himself more than $300 million by dumping $3.4 billion in Amazon stock just before the coronavirus pandemic reached the US. Was this just good business sense or is something suspicious going on?

He can now buy it back cheap. I don’t blame him. The system is rigged such. Far worse things have happened, e.g. just before the “9/11” attacks in USA.

Now the extension to April 14 will yet be another disaster unless they are “flexible enough” in gauging the situation closely. MCO must not be used over-zealously/rigidly that rendered it to kill and exterminate all movements !

Penang just need to Enforce Border Law and learn to Enforce Hard for it WILL BE VERY HANDY ONE DAY AS PART OF AGENDA 2020…..otherwise let people travel freely and enjoy the coming sudden rates….Malaysia is 4th world status trying to implement 1st world respond…