The damage at the Protestant Cemetery was due to lack of supervision of landscaping workers tasked by the MPPP to prune and remove trees that were affecting the old tombstones. 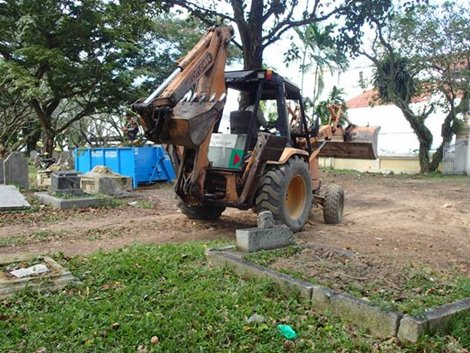 The work was deemed necessary as the roots of the trees were undermining the tombstones while the tree cover had promoted the growth of fungus.

An expert botanist had identified the problematic trees – just over 80 of them. Most were for pruning and less than a quarter for removal.

The project was undertaken by the George Town World Heritage Inc while the actual work of pruning/removal of the trees was carried out by the MPPP’s landscaping department.

A private contractor was tasked with removing 14 trees while the remainder were handled by the MPPP.

The cemetery has about 400 tombs, not all of them identifiable. Francis Light, who took possession of Penang Island for the East India Company, must have turned in his grave as the excavator snorted and grunted.

Apparently, following a trip to Singapore, then chief minister, Dr Lim Chong Eu, ordered many open spaces around Penang to be used as nurseries for roadside trees. The damaged section of the cemetery, by then an unused open space, was used to plant some saplings – which in hindsight, was not a brilliant move. (The place originally had only a row of frangipani trees.)

While the work to remove those trees was being carried out, an aghast heritage enthusiast who spotted what was happening spoke to the workers about their reckless methods. “But there was utter disregard (for these concerns),” said the enthusiast.

Photos later showed several cracked, shattered or chipped tombstones. These will now have to be somehow restored.

There are lessons to be learned from this unhappy episode. Workers have to be trained in such heritage restoration and maintenance work, they have to be meticulous and careful, and there must be very close supervision of the contractors and their workers.

If those tasked with carrying out the work are found to be incapable of handling the job to satisfaction, then it would be better to call off the work altogether rather than risk inflicting more damage than if Nature had taken its course.

This is outrageous! Find someone else who doesn’t see these tombs as just piles of rocks! They are extremely valuable pieces of our history!

This comes under YOUR jurisdiction. It seems like you are not able to delegate properly, which Jabatan is at fault here?

As Penangites…we are tired of how unprofessional MPPP executes plans and enforcement. Sudahlah…

I’m still waiting for your people to allocate a PROPER place for the Batu Ferringhi night markets! These stalls take up the only pedesterian walkway around here. How to walk!?

GTWHI supervise contractor? Hello, that’s not their role la! Their job is to take care of big time heritage elites only. They really sayang heritage you see. What they want to hang around dirt, moss and cemetry for — this not heritage la. The fault is definitely with GTWHI and MPPP. But of course if this is the job of a big time contractor his company will be protected. However, If it is a small desperate contractor — sorry la, the poor fella will be bullied and made to shit in his pants! But then maybe semua empat sekawan —… Read more »

Change tombstones? To gold plate? How much to charge?
Maybe, one of these nights, go & wake up Captain Francis Light with Kopi-O kau kau for an answer!
FYI, according to Chinese fengshui, any tilting of 100% vertical tombstone will cause unfavorable consequences for the deceased’s direct descendants. Any chipping will cause all male descendants to suffer baldness! And any uprooting of grave will cause descendants to suffer losses & eventual relocation (from island to mainland). Sound too dire & too close to Penangites!!!
Don’t play, play with tombstones, men!

Tak pakai is better than losing or being siphoned of millions or billions like the Scorpene and patrol boats by the Cheap. Worse still is the useless boh hood Gerakan and 0 KPI CM KTK that waste money on the 300K artificial hibiscus at the Udini roundabout. Or maybe some one is also too blind to see the 100K small bridge from Lintang P Ramlee to Lorong Kulit being immediately dismantled after completion. Tak pakai MPPP workers have been since the days of Malayan Cheap Association (MCA) and Geelakan for the past 50 years and they are all left much… Read more »

Its a 200 years problems and MPPP workers being careless is not a big deal. MPPP workers are now hardworking and efficient due care and concern by PR LGE compared to the days of Bo Hood KTK and Geelakan. The cemetery will soon be transformed into one of the most beautiful heritage sight soon just like the various sight heritage and non heritage.

That’s regretable. George Town World Heritage Inc could have had their own people personally supervising it!

Captain Francis Light: “For the past 218 years, I had good night’s sleep under shady trees except for the idiotic Japanese bombers dropping noisy cannon balls (his version of bombs). Nowadays, I eavesdrop Penangites complaining about housing from the hills to the beaches. What the hell is happening to Pulo Panang?
And I thought graveyard is the most peaceful place on the island untouched by itchy hands of developers lest they want my nightly howling.
Now, see what has happened to my Rest In Peace abode?”

Has anyone heard howling complaints from Captain Francis Light on All Souls Day?

Benign neglect in Bolehland is a fine art under the heading of “deniability”. Monuments that have disappeared through no fault of any one (heaven forbid) include the heroes’ monument at Morib beach and the St Francis well at Malacca beach.