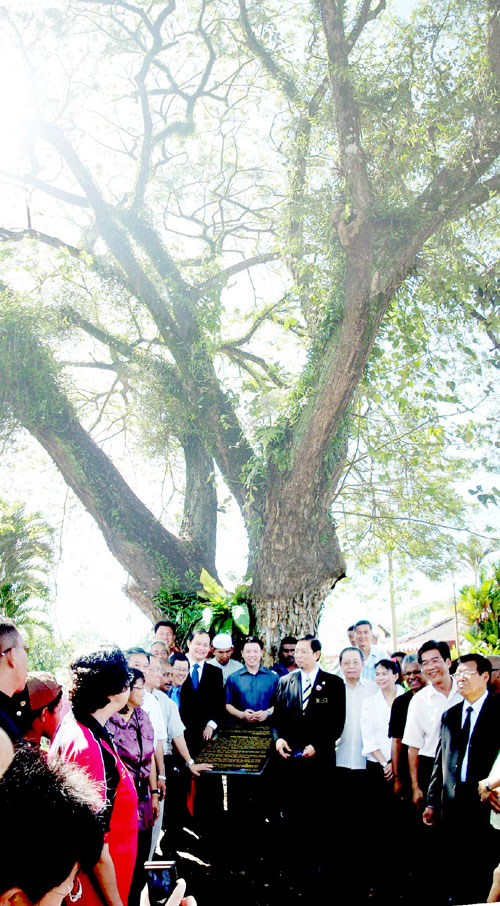 The morning sunlight filters through the branches, lending an enchanted and mystical aura to the fabled tree 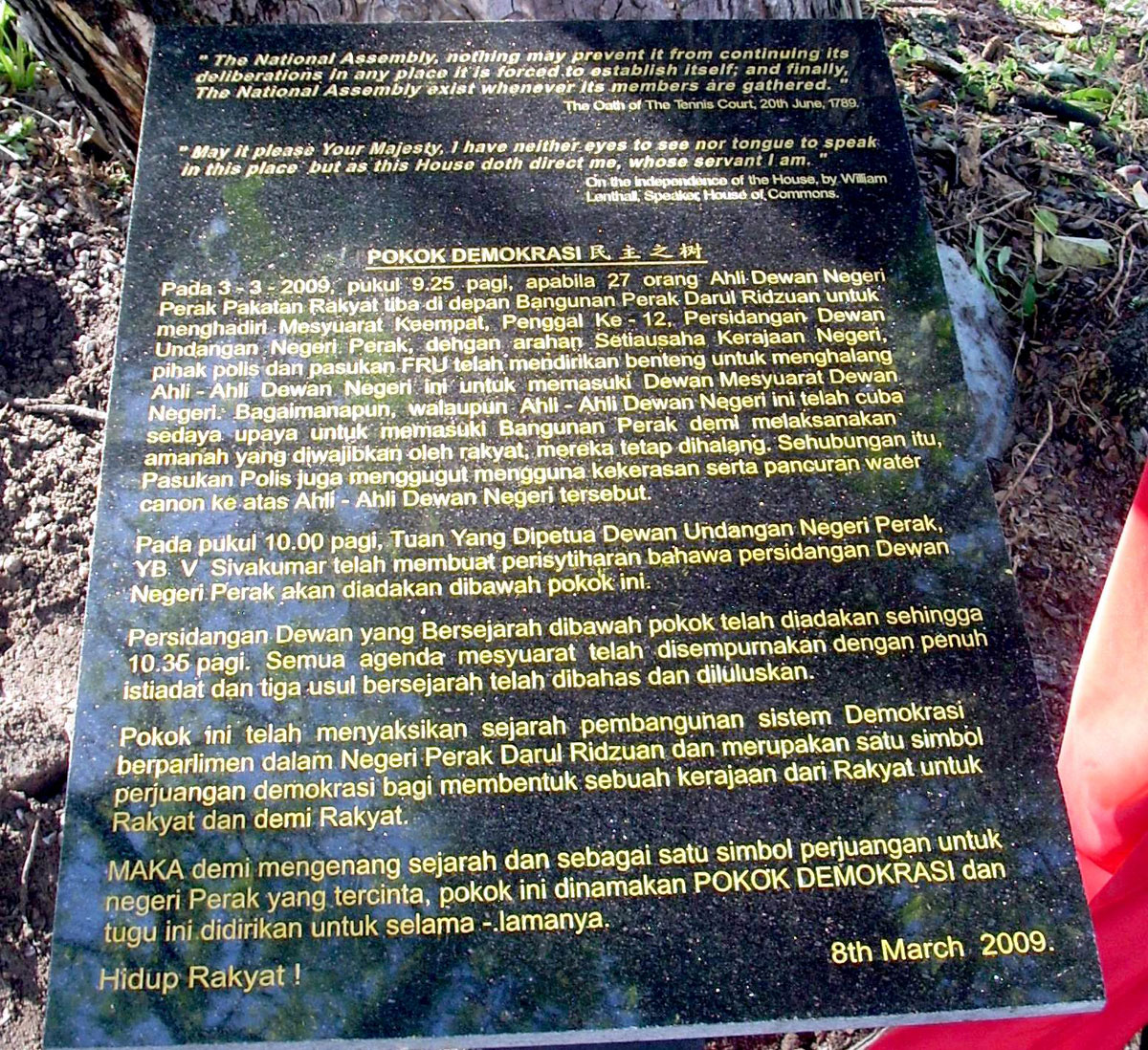 It’s official: The marble plaque beneath the Democracy Tree (Click to enlarge) Photos by Kinta Kid

Perak leaders gathered at the base of the ‘Democracy Tree’ this morning to officiate a plaque highlighting what transpired on 3 March 2009.

The black marble plaque with gold-plated inscription starts off with two quotes during somewhat similar episodes that occurred in France and the UK and then goes on to explain the events of the morning of 3 March:

…when 27 state assemblymen were locked out undemocratically from the house by the police and the FRU under instructions of the State Secretary… At 10.00am the Speaker of the House YB V Sivakumar then instructed the assembly to adjourn to the tree to deliberate the motions of the agenda… By 10.35am all motions were passed following full traditional procedures….

Another five raintrees were planted this morning and each sapling had a title, Amanah (Trustworthiness), Adil (Justice), Telus (Transparency), Kebajikan (Welfare) and Wibawa (Integrity).

“On 3 March, history was made. Five days later. on 8 March ada lima anak (it has five ‘children’),”  Nizar quipped, to the laughter of all present.

One for the album: Pokok demokrasi and its five saplings are already inspiring Malaysians

The ceremony was also attended by MP Lim Kit Siang and Sg Siput MP Jeyakumar Devaraj. All in, there would have been 300 people, mostly press and assembly members that turned up. After the ceremony though, families were already taking photos with the tree and saplings in the background.

Now this “PHD” want to chop down the trees. Isn’t this the irony of tyranny. … You arrogant BOY. It is the usual way out for tyrants, customarily rebelling against nature and Allah/GOD…

lucifer had just assumed that we are all supporters of PR…he had so furiously defended himself …can’t even take a light hearted joke …maybe thats why “she” was never accepted in the first place…maybe thats why even when the alphabets “A” (Angel or does “she” means ALTATUNYA?) and “N” (Numbskull or does “she” means NAJIB?) was mentioned…”she” got so berserk and became agitated….hmmmm….ooppss…maybe it is just “her” PMS again….ahahahahah…siapa makan cili “dia” yang rasa pedas…

Man of many ‘nothing’ Lucifer. Its better to know oneself where he is than not. Go ahead, make my day.You need to try harder, sweat more like you used too. By the way, don’t get 3rd party involved like susanloone’s blog. She is miles apart from you. To begin with, we don’t hide ourselves behind some funny ‘Lucifer?’ Ha ha, its like the ‘small boy’ issue. Thought I soften ur ego bit and move on. Its not about just u and I. More important things to share. My apology to Anil in exhibiting these exchange with this Know all Lucifer… Read more »

CL Wong if you feel insulted by my comments you should knock yourself up from your dream. Who and what I am is established? You only saw 2 comments and you want to judge me? Good lord another “gloomy” Malaysian. Oh you are one of those …. that judge people by their names too? You are not thinking with a clear mind aren’t you? You start bashing people when you see them talking against PR and yet you have no proofs that PR has done a good job. Anyways, if you want to bash people who go against PR you… Read more »

The tree is infested with termites. Has to be cut down for public safety

There’s a spelling error for “Dipertua” which came out as “Dipetua”. That’s bad.

I am surprised no police and watercanons were summoned to prevent the plaque from being placed and the sittle saplings planted. I think perhaps there is hope yet since police brute force did not go to the extent of preventing this show of the power of the people. It is no shame to have the assembly under a tree, it is to show the powers that be that they cannot prevent people from wanting and enacting their rights . There is no shame in the plaque , it shows that there the will of the people . Pakatan Rakyat are… Read more »

Lucifer, Who and what you are has been established. Need not go around trying to impress your opinion by showing off what little you know and insulting others, like what Im doing to you right now. Its not fair and its not right. So, pls stay focus and move on? Constructive feedback is good but not destructive comments pls. All rakyat has to be patient and allow PR to do its work. The key question here is not just how much better PR can do, immediate benefits are, IT MUSN’T BE WORST, This have already been evident and proven. Look… Read more »

I apologize for my outburst of indignation, I am in rage of not getting some important messages through a few days ago, and looks like my previous comment had uncovered a few colours of Malaysians. First of all, I am no supporter of BN which is a government that has to be incarcerated for what it has done. Any person who has IQ more than 80 can understand this. As for people who has IQ lower than 130, you can only hope that PR will take over and govern Malaysia because you only have two choices; BN or PR. You… Read more »

Can’t help but to take a cheap free pot shot for a cheap comment by cheap devil “Lucifer”. The devil usually knows only one thing, that is to cast doubts and divide people in the house of common.
Whatever Anil stood for, its the fruit that tells the root. Fortunately Lucifer have its tree planted upside down showing off its roots for all to see. Bless You and may you remain where you are for human and God sake.

I hope the tree will not die of shame that Perak has been made the laughing stock of the world. And that marble plaque will be its tombstone.

it’ll definitely be a very famous tourist spot. no doubt about it

Sorry to digress from topic. My view is that the real Lucifer (chief angel of God before being…er…booted/cast out from Heaven?) only wanted his/her powers to equal that of God’s, and not I think, to be “like God”. I could be wrong of course but I think that had angelic Lucifer merely wanted to be another God, God would not have minded at all. Now does that fall within the ambit of that manipulative man-made definition called “blasphemy” and which is, as we all know, the more religious sibling of that other secular one called “sedition”? I know it’s the… Read more »

wuahahahah
Man proposes
God disposes
He also disposed Lucifer…
Lucifer, you could have just called yourself ‘god’ coz Lucifer wanted to be God…

Pokok Demokrasi! What a name! Marble plaque or no marble plaque, the generations to come will remember always remember ‘March Three’ under the tree.

lucifer…what a name…and what nice language that you used…your name…your language suits just those who are with that N guy….or maybe you are just another ghost of that N….I just hope the is really something called ghost….so that Ms A will come into your dreams and take you back to where you belong to…hahahahhaa

believe me, the trees (could) be uprooted soon…. reason?

The water cannons (could) be on standby as the goons do their dirty work. For good measure, it (could) be legalised by an intellectually challenged person who happens to be on probational duty.

… wither you trees like the constitution being trampled by power crazy and corrupt politicans.

I hope someone watches over these trees. Otherwise, they could be killed by the very people who killed democracy in Perak on 3 March 2009.

maybe khairy will send mat rempits to uproot them all 😉

This gotta be some kind of a joke. instead of shifting their attention to serve the public and get everything to start working again, they waste time to construct a useless memorial marble for that tree? I’m starting to lose confidence on PR government. and for **** sake do not keep deleting my comments just because they go against your ****ing ideas Anil. You are starting to act like BN government that single-handily destroyed freedom of speech. Hey, if I ever deleted your comments, they must have been really terrible – or it could have been deleted by the automatic… Read more »

I don’t know if it sybolises the rotten state of our democracy or not but the tree looks a bit unhealthy. Someone should see to it that it is pruned and perhaps some top soil to nurse it to health. I get the feeling that some (people) will cut it down just to spite the opposition.

DARI PERLIS SAMPAILAH KA SABAH, KITA SUDAH MERDEKA! NEGARA MAKMUR, RAKYAT MEWAH, KITA SUDAH MERDEKA! DENGAR SEMBOYAN KITA BERJAYA, GEMURUH DI ANGKASA, SATU BANGSA, SATU BAHASA, MALAAYSIA BERJAYA It is now left for the other Pakatan Rakyat members – whether Parti Keadilan Rakayat, Parti Tindakan Democratik or Parti Islam – to plant the seedling of this particular tree in every state where they operate. Let this seedling of democracy grow into the giant tree that it promises to be and let it provide the shade for all Malaysian democrats from Perlis to Sabah. Preventing the Perak elected representatives from meeting… Read more »